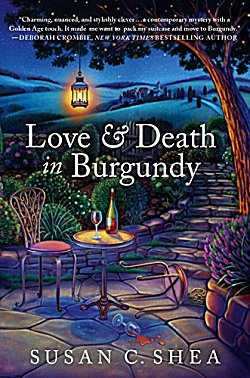 First Line: Reigny-sur-Canne was hardly more than a crossroads in Burgundy's famous landscape of pastures and grapevine-planted terroirs on rolling hills, overlooked by tourists for the most part, which was fine with its residents.

Artist Katherine Goff and her singer/songwriter husband Michael have been living in the small French village of Reigny-sur-Canne for three years. Only one thing is missing from Katherine's idyllic life: being accepted by the villagers and making true friends. Little does she know that a murder may just bring this seeming miracle about.

A wealthy, difficult, and much-gossiped-about Frenchman dies soon after having harsh words with one of Katherine's guests at her home. Found dead at the foot of the stairs in his palatial home, it's not really known if the man was murdered or if his death was an accident, but that doesn't stop the village gossip mill from roaring to life. What surprises Katherine is how quickly she's drawn into the whole affair, and the more she learns about the secrets of the villagers, the more she wants to be the one who finds out which of her neighbors might be a killer.

Love & Death in Burgundy is filled with Gallic charm and should be enjoyed by readers who are fans of Martin Walker's Bruno Chief of Police series. In Shea's book, however, the main character is an American living in France, so its Frenchness is diluted a tiny bit. The cast of characters is varied. From Katherine and her husband Michael, to the villagers, to an American couple in the recording business, to an English ex-pat trying to write a mystery, readers get to see the village from several points of view.

To be completely honest, I did get tired of Katherine whining about not making the sort of friends she wanted. She was told from the very beginning that this was extremely difficult for any newcomer to accomplish. A little guilty pleasure for me concerning Katherine was that she and her husband don't have a marriage that's all sweetness and light. No marriage is, and while their differences aren't deadly serious, it makes the characters-- and the book-- more real.  (No, I'm not against happy marriages!)

My favorite character in the book happened to be fourteen-year-old Jeannette who is totally bored with village life and spends most of her time on nocturnal prowls through people's property-- rather like a family cat who's turned outside for the night to do whatever it wants. Not only is Jeannette is a gold medal-winning snoop, she's light-fingered as well. She is the one who truly has her fingers on the pulse of the village, but seldom does anyone listen to her. After all, she's just a child.

There's a lot to like in Love & Death in Burgundy-- the very French atmosphere, an intriguing mystery, an interesting cast of characters, but... for some reason that I can't really pinpoint, this well-crafted book just didn't grab me. Your mileage may definitely vary, so don't hesitate to give it a try!