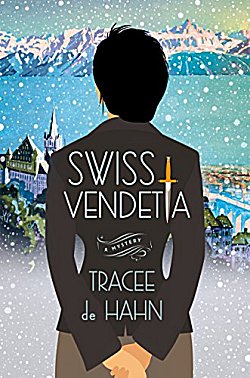 Wanting to rid herself of all reminders of her old life following her husband's death, Inspector Agnes Lüthi has just transferred to the Violent Crimes Unit from Financial Crimes in Lausanne, Switzerland. On the eve of the worst blizzard the city has seen in centuries, Lüthi is called out to her first homicide. A young woman has been found stabbed to death on the lawn of the grand Château Vallotton at the edge of Lac Léman. An appraiser for a London auction house, the dead woman had been taking inventory at the château, a medieval fortress crammed with priceless works of art and historical treasures.

Lüthi finds it difficult to obtain information from anyone, and as the blizzard rages on, roads become impassable and the power goes out. The inspector is now trapped with all the players in this mystery, out of her depth in her first murder case, and still struggling to cope with her husband's death.

The investigation in Swiss Vendetta only took four days, but it seemed much longer. This is due in part to the claustrophobic weather and the locked room angle of the story, but it's also due to a slow pace that hampers the first half of the book. It was much too soon for Lüthi to lead any sort of investigation, but once the truth surrounding her husband's death is revealed, the pace picks up and the inspector shows a fine eye for detail and for putting clues together.

The author has created a strong, atmospheric setting as well as an intriguing mystery peopled with a varied and interesting cast. From the hidden life of the dead woman to servants who have been loyal to their employers for generations, de Hahn drew me right into the lives of the old nobility who are accustomed to their treasure-filled ancient castles and mansions.

I enjoyed my visit to Lausanne and look forward to Inspector Agnes Lüthi's next case.