Shadows on the Lake by Giovanni Cocco & Amneris Magella 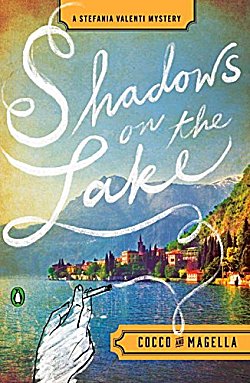 First Line: A light breva was blowing across the lake.

A young man's remains are unearthed during the construction of a new road to Switzerland in the mountains above Lake Como, Italy. The land belongs to the powerful Cappelletti family which means that lead investigator Inspector Stefania Valenti must proceed with caution.

Her investigation takes her right back to World War II when the Lake Como area attracted smugglers, deserters, secret agents, and fleeing Jews. Valenti will be uncovering family secrets, a tragic romance, and a fascinating piece of Italian history.

Cocco and Magella's first Stefania Valenti mystery as translated by Stephen Sartarelli is steeped in the history of Lake Como in northern Italy. Stefania is forty-five, divorced with an eleven-year-old daughter Camilla who's a bit spoiled. As the investigation continues, readers see how determined she is and to what lengths she'll go to solve a case.

And the case is a puzzling one that has everything to do with actions taking place during World War II. The secrets surrounding the young man's death have been very well kept because only one person knows the truth.

You can't have a mystery set in Italy without descriptions of mouth-watering food, and Shadows on the Lake is no exception. Do not read this book when you're hungry, or you'll be placing a huge order with your favorite Italian restaurant. You have been warned!

If I have any complaint at all with this book, it's with the secondary cast, which does not make a strong enough appearance. This book is Stefania's show. Carboni may be her boss. Lucchesi and Piras may be her underlings. She may be romantically inclined toward Luca while Giulio is romantically inclined toward her, but we get to know Stefania much better than all these other characters. I hope this changes in the next book because I'm certainly going to be reading it. Shadows on the Lake is a strong, enticing blend of history, culture, and an intriguing main character. More, please!