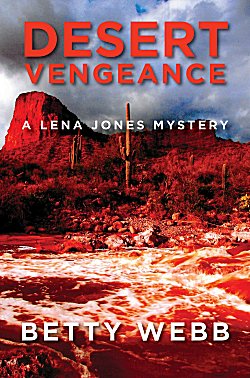 First Line: I was waiting for him when he stepped out of the prison van.

When "Papa" Brian Wycoff walks out of prison after serving part of his sentence for raping children, private investigator Lena Jones is waiting for him in the prison parking lot, a very large, sharp knife in her hand. As a nine-year-old foster child living in the Wycoffs' home, "Papa" raped her repeatedly, and Lena wants to ensure that his freedom is anything but free.

Wycoff survives the meeting, but the very next day his wife-- who knew of the crimes and did nothing (even enabled him)-- is found dead in their Apache Junction home. Terrified that he'll be next, Wycoff flees to his brother-in-law's ranch outside Black Canyon City. A couple of days later, he too is dead. Lena followed Wycoff to the ranch to make sure that he kept his hands off any child who might come near, so she is one of the first people the police question. Yes, she wanted the man dead, but someone beat her to the punch. When suspicion falls on Wycoff's other victims, Lena takes the case, more to protect the mother of a missing child than to find the killer. As she investigates, moral dilemmas will follow her every step.

Webb's ninth Lena Jones mystery is a visceral, informative look into the world of serial child rapists and the long trail of victims they leave behind. Although far from being graphic, Desert Vengeance is disturbing reading. Of all the things that have happened to Lena in her lifetime, her abuse at the hands of "Papa" Brian have left some of the very deepest scars. Even though we know Lena shouldn't come anywhere near the man when he's released from prison, it's almost impossible not to cheer her on when she greets him in the prison parking lot or dogs his every move to let everyone around him know exactly what sort of lifeform he is.

It's once the action moves out to Black Canyon City that the moral questions begin coming thick and fast. As Lena becomes acquainted with the members of Parents of Missing Children, her conscience is torn. Does a serial child rapist, a pedophile who's also implicated in the disappearance of several children, really deserve justice? Does his wife who looked the other way and aided and abetted his actions? Webb delves deep into the lives of survivors of child rape. How do they fare after such a horrendous event? How do the parents of missing children cope with their loss?

This is some of Betty Webb's most powerful writing. It makes you think. It makes you feel. It makes you question some of your long-held beliefs. And to top it all off, Desert Vengeance is a damned fine mystery. If you're not acquainted with Lena Jones, you should really do something about it.