Keeper of the Castle by Juliet Blackwell 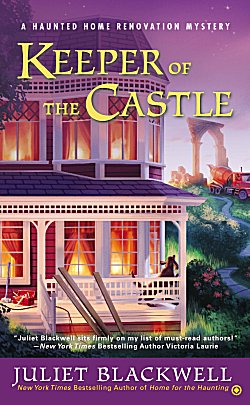 First Line: Communicating with the netherworld can be a game changer.

Business is slowing down and Mel Turner needs a job so she can pay bills and not be forced to lay off any of her crew. Unfortunately work comes in a form she would prefer to turn down.

Mel's boyfriend Graham has his hands full with the reconstruction of an ancient building shipped over from Scotland. The job has been plagued by strange goings-on and rumors that the stones are cursed. At first he merely brings Mel in to check for paranormal activity. Mel not only finds it, she also finds a body-- and work for herself and her men.

The original work crew wants to walk off the job, so Mel brings in her own crew to work with them, but she's got to work fast. Between restless spirits and a killer on the loose, she's got her work cut out for her.

Although I tend not to like much of the paranormal in the books I read, Juliet Blackwell knows the one angle that I like most: haunted houses. I've enjoyed her Haunted Home Renovation series from its inception, not only for the spooky old homes, but because it's a series with a lot of meat on the bone.

Mel is a perfect heroine for a cozy series. She's quirky, smart, funny, and hard-working. Since this new job site is in a remote location, she has to pack a bag and move in. Her job isn't made any easier when she discovers that she has to deal with people who remind her of Mrs. Danvers and Nurse Ratched. To the author's credit, Danvers/Ratched do not remain mere cardboard cutouts. We can also see how good Mel is at her job by the way she gets the new crew on her side-- not an easy task when they're ready to head for the hills.

The secondary characters back Mel up perfectly, from her dad to Graham to the eccentric billionaire footing the bill for the ancient monastery to her stepson Caleb who spends his time getting in hot water.

Another aspect of this series that I enjoy is that readers always learn something relating to architecture and renovation. In Keeper of the Castle we learn how to stay true to medieval architecture while meeting modern building codes (in addition to the proper way to run a construction crew).

The mystery is strong as well. Blackwell provides plenty of misdirection to keep everyone guessing, and there's a good resolution to the ghostly subplot, which is more involved than originally thought.

I can count on Blackwell's Haunted Home Renovation series for quick, entertaining, and enlightening reads. Bring on Give Up the Ghost!