Inspector of the Dead by David Morrell 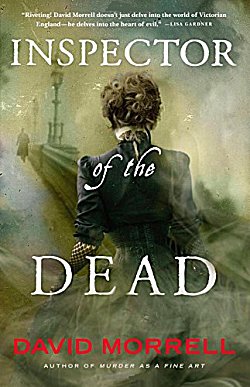 First Line: Except for excursions to a theater or a gentleman's club, most respectable inhabitants of the largest city on earth took care to be at home before the sun finished setting, which on this cold Saturday evening, the third of February, occurred at six minutes to five.

It's 1855. News of the incompetence of British commanders in fighting the Crimean War has caused the fall of the government. Thomas De Quincey and his daughter Emily have worn out their welcome at the London home of Lord Palmerston, but just as Palmerston is getting ready to stuff them both into a coach and send them far, far away, De Quincey's skills are suddenly in great demand.

Two Scotland Yard detectives, Ryan and Becker, know how brilliant this little opium-addicted man can be at finding and interpreting clues-- and looking deep into the minds of killers. Now there is a mad man on the loose who's killing members of the upper class. With each corpse is the name of someone who had previously tried to kill Queen Victoria. All the evidence points to one conclusion: this killer will not stop until Victoria is dead.

Using some popular Victorian writing techniques to brilliant effect, David Morrell once again immerses us in Victorian London. As a result of his meticulous research, London comes alive-- sights, smells, sounds-- and readers will easily be able to put themselves right in the streets and buildings of the city.

However, the setting isn't the only marvelous thing about Inspector of the Dead. This is a fast-paced book that grabs hold of you and won't let go. The action scenes (especially one in which a policeman goes home for the night) can actually scare the stuffing out of a person, and as long as you can read while sitting in a corner so no one can sneak up on you, you have to admit that it's a wonderful way to be frightened!

The pace is so fast that readers can be forgiven for getting caught up in the narrative and forgetting to try to deduce the identity of the killer, but it's not just the pace and the pitch perfect setting that causes such forgetfulness. Morrell has created a living, breathing cast of characters, especially the brilliant but much maligned Thomas De Quincey. Few writers have such a special way with historical characters as David Morrell.

De Quincey was fifty years ahead of Freud, and it's fascinating to watch him use psychology to solve crimes. It's also fascinating to watch others watch him. In the first book in this series, Murder As a Fine Art, readers got to see those two Scotland Yard detectives (Ryan and Becker) ridicule De Quincey's methods. Now in Inspector of the Dead, they are believers and have to convince others to let the little man be so he can do his work. An added bonus is the fact that readers get to learn more about his strong-willed, unconventional daughter Emily, and Lord Palmerston also has his turn under the microscope.

I was sad to see this book end. My only consolation?  The next book in the series, Ruler of the Night, will be available in November 2016. I can't wait!