Watching the Ghosts by Kate Ellis 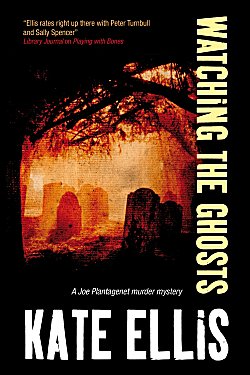 First Lines: Tick tock. The thing had eyes. And it was watching her.

Havenby Hall is now a converted apartment building called Boothgate House. Why the change in name? Havenby Hall was once an insane asylum-- which might just put off prospective residents. Speaking of residents, one of the asylum's last was a notorious serial killer who died under mysterious circumstances shortly after the place closed.

Now a lawyer investigating Havenby Hall is frantic when her young daughter is kidnapped. What else could go wrong? A paranormal researcher is fascinated by the building's basement and won't stay away. Or... how about a burglar who has an inventive way of insuring he has plenty of time to escape if homeowners return too soon. A Boothgate Hall resident becomes one of his victims.

Detective Inspector Joe Plantagenet thinks both the kidnapping and the burglaries may have a connection to the building's past, and the more he investigates, the more he puts those closest to him in danger.

I enjoy this series for its lovely, atmospheric portrayal of Eborby (York). Ellis describes it so well that I get the shivers and believe that all sorts of spooky things could happen there. I love rich, textured settings like this, although you would never ever catch me moving into a former insane asylum.

The mystery is convoluted but not confusing. There are plenty of viable suspects on hand besides the actual responsible parties, but once those responsible parties begin to be uncovered, the denouement is practically incestuous. (I mean that figuratively, by the way.) There's plenty to like about Watching the Ghosts, but it isn't quite up to Kate Ellis's usual high standards. That's not about to keep me away from the next Joe Plantagenet mystery though-- she's one of my favorite writers.