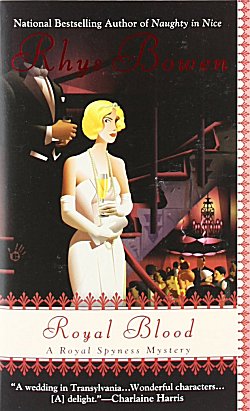 It stinks being thirty-fourth in line to the throne of England. Not just because you're penniless and don't know where your next meal is coming from. Not because you have one of the worst sisters-in-law known to mankind. No, it stinks because when the Queen wants you to jump, pretty much all you can do is smile, curtsey, and ask, "How high?"

This time the Queen wants our hapless Lady Georgiana to represent the royals at a wedding in Transylvania. (Can you hear the wolves howling in the dead of night? So can I.) Once Georgie arrives, it's one weird happening after another. The bride-to-be found with blood running down her chin. One of the wedding guests poisoned. One thing is for certain: it's up to Georgie to save this royal wedding before anyone else dies.

This fourth book in the Royal Spyness series is just as much of a delight as the first three. I can rely on Rhys Bowen to present me with a perfectly rendered setting and make me laugh while I'm learning about the lives of royals in the 1930s. In many ways this is my favorite historical mystery series simply because both author and reader have so darned much fun at their appointed tasks.

In Royal Blood, we have Georgiana in a Dracula-inspired set of a castle in remote Transylvania that's filled with secret stairs, secret cubbyholes, secret rooms-- some which are known and others which seem to have been completely forgotten. Beastly weather. Some absolutely beastly guests. Add to this mix a reluctant Georgie, her new (and untrained) maid Queenie, Mum the Bolter, Belinda the gate crasher, and otherworldly people who seem to be able to climb up and down the sheer walls of the castle, and you have the recipe for a lot of fun.

I've already told you that the setting, humor, and characters all sparkle, but what about the mystery itself? Bowen really had me scratching my head until the identity of the intended victim is made clear, and then the light bulb went off above my head. Did the knowledge of whodunit spoil anything for me? Absolutely not!

Once I'd read the first book in the series (Her Royal Spyness) I was hooked, and I busily gathered up all the rest. It would be very easy for me to gorge on one book after another, but I don't let myself. Of course that rule could be subject to change! If you enjoy light-hearted historical mysteries as much as I do, indulge yourself with the antics of Lady Georgie-- and please start at the very beginning so changing relationships and growing characters will make sense right from the get go.