The House Between Tides by Sarah Maine 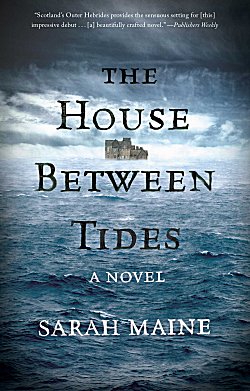 First Line: The woman stood a moment on the old drive and stared up at the boarded windows, a dark silhouette against the grey walls, then she turned her back on the house and went down to the blaze on the foreshore.

In a strained relationship and in need of a change, Hetty Deveraux leaves London and heads for her ancestral home in Scotland's Outer Hebrides. She fully intends to restore the sadly neglected house and turn it into a hotel, but her plans come to a screeching halt when human remains are found. There's little left to identify the body, but one thing is certain: the person did not die a natural death.

Hetty wants answers and soon discovers that Muirlan was once the home of her distant relative, Theo Blake, an acclaimed artist and naturalist, who brought his bride Beatrice there in 1910. Ancient gossip still lives about the couple: Beatrice eventually vanished and Theo became a recluse. As Hetty works to find the identity of the body interred in Muirlan, she also uncovers many secrets with which will affect her future plans.

The House Between Tides is a true Gothic novel, complete with a remote location, a creepy old house, and two heroines to root for. Hetty Deveraux in the present day and Beatrice Blake in 1910 are both a bit down-trodden by men who know what's best for them and keep to their own agendas. Both are women most readers will feel a great deal of empathy for, and both start to come to life in that remote area.

Sarah Maine brings the Outer Hebrides to breathtaking, lyrical life; her descriptions were among my favorite parts of the book. Although the plot of The House Between Tides was a bit too predictable for my taste, I did enjoy the psychological aspects of it, and the author certainly has a strong talent for characterization and setting. I look forward to her next book. I recommend it if you are fans of Kate Morton or Daphne du Maurier.