I Shot the Buddha by Colin Cotterill 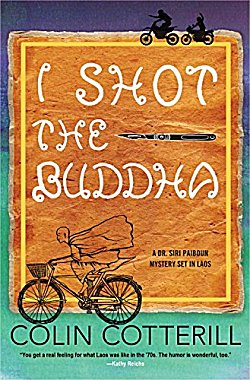 First Line: It was midnight to the second with a full moon overhead when three women were being killed in three separate locations.

Dr. Siri Paiboun and his wife, Madame Daeng, share their small home in Vientiane, Laos, with an assortment of homeless people and oddballs. It's 1979, and the Communists have yet to find a way to share the country's wealth with all its people. One of Siri's oddballs is a Buddhist monk named Noo who gets on his bicycle one day, pedals off, and never comes back. He does leave one thing behind though: a note in the refrigerator asking for Siri to help a fellow monk escape across the Mekong River to Thailand.

Since Siri is the retired national coroner, he's got time on his hands and simply cannot resist an adventure like this. Soon he and his friends are on the road and coming in contact with Lao secret service officers and spiritualists. It doesn't take long for these wily retirees to realize that, in order to save an innocent man, they're going to have to find out who's been hiding terrible crimes behind a smokescreen of religion.

It's always a pleasure to visit with Dr. Siri and his friends, and I Shot the Buddha is no exception (even though I still hear Eric Clapton singing "I Shot the Sheriff"). Colin Cotterill has taken a rather dire period of Laotian history and peopled it with a memorable cast. He has a rare talent for combining truth and humor-- showing how miserable life under Communism in Laos could be, having us feel it, and then making us laugh about it all. To some this may sound callous, but it's not. People living in want and drudgery will often find the humor in day-to-day living; it's human nature. And while readers may laugh, they will also remember.

Although Dr. Siri, his wife, and his group of friends are all marvelous characters, I think Mr. Geung is my favorite. Mr. Geung has Down syndrome. He earns a living. He's in a good relationship. He's hard-working, kind, loving, and funny. He can also make observations that help Siri solve his investigations. Not only that, but Mr. Geung is probably the happiest character of them all. He is a man to respect, and I do. I also have a great deal of affection for him. See? That's one of Cotterill's greatest strengths: creating characters that worm their way into our hearts.

I Shot the Buddha has one of Cotterill's trademark convoluted plots that's enjoyable to read all the way to its conclusion. I do worry though. Dr. Siri is almost eighty-- how many more investigations are in store for him? Slow Father Time down as much as possible, Mr. Cotterill. I want these wonderful characters to hang on for as long as possible!