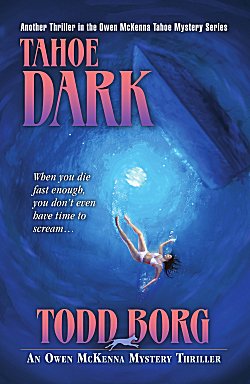 First Line: "We got your son Jonas," a voice on the phone said.

In a kidnap-gone-wrong, David Montrop pays the ransom for his son, but is then murdered. Since he followed instructions and did not tell law enforcement, the police are unaware that Jonas's life is at stake. The very next day an armored truck loaded with money for a local casino is robbed. The company's boss puts P.I. Owen McKenna in charge of finding the four robbers.

When McKenna finds two of the thieves brutally murdered, he also uncovers evidence that links one woman to all three deaths. Evan Rosen worked for David Montrop, and she had a powerful motive for wanting the robbers dead.  When Evan is arrested and charged with murder, Owen goes into overdrive. Why? Because he's convinced that Evan had nothing to do with the murders, and he's got to work fast to prove her innocence.

I would say that Todd Borg cranks out one marvelous book after another, but that would give you the impression that each Owen McKenna mystery is thrown together on an assembly line. Nothing could be further from the truth. Tahoe Dark-- like the other books in this series-- is tightly plotted and well-paced, with a mystery that keeps you guessing, and a cast of characters that many other writers would kill for. Throw in the breathtaking scenery of Lake Tahoe, and you've got a little slice of heaven between the covers of a book.

There's a lot going on in Tahoe Dark: kidnapping, multiple murders, an armored car heist, skullduggery out on the lake, skulking around buildings in the dead of night... but none of it is confusing, and all of it makes you work at coming up with the right solution. Speaking of that solution, it's going to be difficult because Borg throws in some excellent misdirection.

Some of you are going to see the word "thriller" being used to describe this book (and the entire series), and you're going to turn up your noses. Don't. Yes, the plots are fast-paced thrillers with hair-raising action. Yes, Owen McKenna is a private investigator. Yes, damsels in distress-- like Evan Rosen-- turn up from time to time. But McKenna isn't your typical gumshoe who gets beat up regularly, has a love affair with his gun, speaks in terse gumshoe, and thinks women are only good for one-night stands. He's the type of man most women would sell their eye teeth to get their hands on. He doesn't shoot first and ask questions later. He doesn't talk like Sam Spade. He has a good working relationship with the various law enforcement agencies in the area. He likes art and music and the outdoors, and he is in a committed relationship with a brilliant entomologist. (For those of you who don't care for romance in your books, don't you turn up your noses either. Owen's relationship with Street is done so well it should make almost everyone happy.)

Outside of Owen, my two favorite characters in Tahoe Dark are Evan Rosen and Owen's sidekick. Evan Rosen is an intelligent, loving, hard-working young woman who's never caught a break her entire life. Borg makes you see past her tough exterior and into her deep despair and longing. You want-- more than anything-- for McKenna to prove her innocence. And that sidekick? Spot is probably the best four-legged partner in the thriller biz. This Harlequin Great Dane is not only good at subduing stubborn bad guys, he comes in handy when victims need reassurance and reluctant witnesses need softening up. He's also a master at eating:


He lunged. It was fast and probably painless for the hotdog. I know Spot bit down at least once, and he had to have swallowed at least once, unless he'd developed a new food-vac technique that I hadn't yet witnessed. But I wouldn't swear that there was more than one bite or swallow.

All this and humor, too. Plus the fact that Spot is just a dog. A well-trained dog, but not Super K-9.

Tahoe Dark ends with a hint of possible danger for Street, which makes me rue the fact that Borg's books only come out once a year. I can't recommend this series highly enough. I love it, and I sincerely hope you'll get your hands on an Owen McKenna mystery. Where should you start? Anywhere actually because Borg does an excellent job of providing just the right amount of backstory to keep you grounded. But don't be surprised if you read one and start looking for all the rest of the books in the series. They. Are. That. Good.