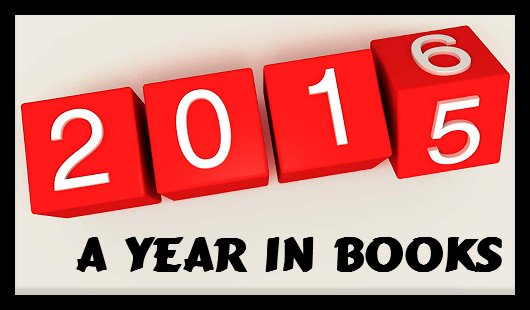 Well, it's that time again-- time for the graph-laden post detailing all my reading statistics for the year. Let's get right down to it. I'll start by posting the list of my Best Reads for 2015. It's shorter than it has been in years past, and I'm not quite sure what that means. This list is in the order in which I read the books, and each title links back to my review.

The Chessmen by Peter May
The Murder Quadrille by Fidelis Morgan
Suspect by Robert Crais
The Strange Death of Fiona Griffiths by Harry Bingham
The Ghost Fields by Elly Griffiths
The Harvest Man by Alex Grecian
Innocence or, Murder on Steep Street by Heda Margolius Kovály
A Man Called Ove by Fredrik Backman
A Desperate Fortune by Susanna Kearsley
A Trace of Smoke by Rebecca Cantrell
The Water Knife by Paolo Bacigalupi
Rage Against the Dying by Becky Masterman
Vengeance Is Mine by Reavis Z. Wortham
The Life We Bury by Allen Eskens


How Many Books Did I Read?

This is the third year that I've read over 200 books. It's one of the things I make sure to keep track of at Goodreads. I've set myself the same goal for 2016, but I'm feeling a bit more ambivalent about it. It was a tiny bit of a struggle to reach goal in 2015. I tend to be a very competitive person about certain things, and I don't want this goal to turn into a personal battle of the books. Life's too short to turn unimportant things into a war. 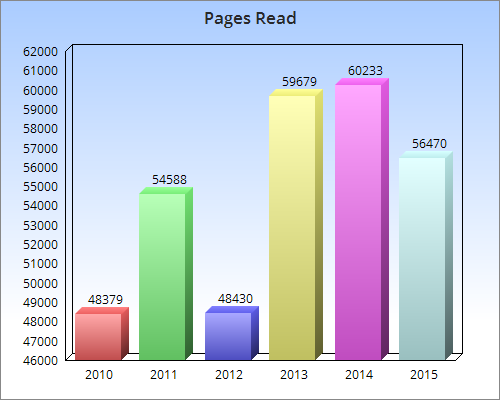 How Many Pages Is That?

I wasn't aware of reading skinnier books in 2015, but evidently I did. I do know that I have some weighty tomes that I've been avoiding, and that needs to stop. Just do it, Cathy! 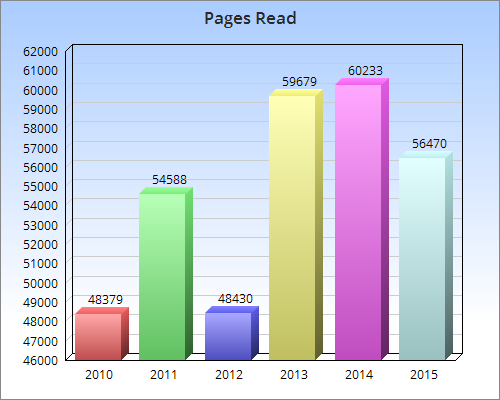 How Many eBooks Did I Read?


In 2010, I did not own an eReader, but once I got one you can see my consumption of eBooks rose steadily each year... until 2015. All these reports have been saying that people are cooling off on eReaders, but I don't feel that I am. I think the drop in numbers for 2015 is directly related to two things: (1) a trip to the UK in which I read extremely little, and (2) reading fewer advance reading copies (ARCs). Most of the ARCs I read are digital copies. 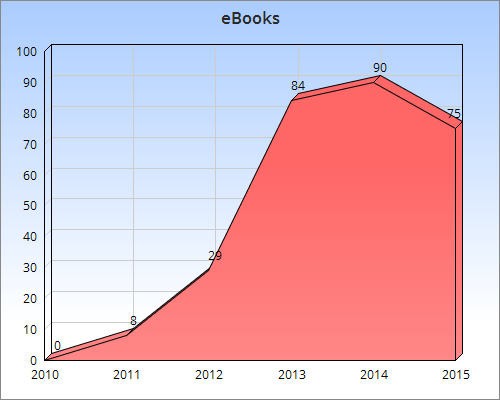 How Did I Rate the Books I Read?

As you can see by the graph, my ratings have been holding rather steady, with the same amounts of A+, A, and B ratings... until this year when it seems as though I went a little bonkers. Fewer A+ books, more A books-- and more DNF (Did Not Finish) books. I don't review the books I do not finish reading here on the blog. I might make mention of them on the Facebook page for Kittling: Books, but not always. What I do remember about this year's DNF category was that I ventured out of my comfort zone several times with varying results. (Some were successful; others were not.) 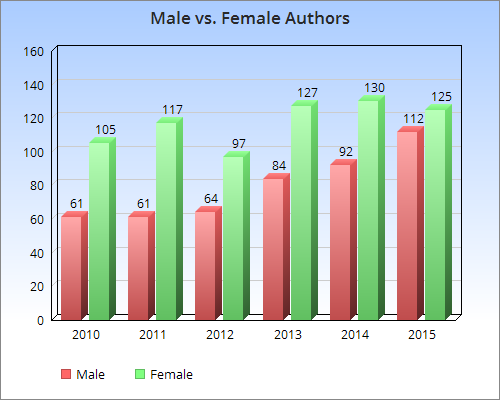 One thing I did keep in the back of my mind throughout 2015 was that I've been reading significantly more female writers than male. For some reason that bothers me (probably harks back to those halcyon days when I was such a tomboy), and I wanted to narrow the gap. As you can see, I did. One thing I've noticed over the years doing these year-end statistics posts is that I tend to be more adventuresome in finding new male authors to read than I am with females. It makes it rather obvious that I have more favorite female writers than I do males. Well, in attempting to narrow the gender gap in 2015, I certainly sampled more new male writers, didn't I? 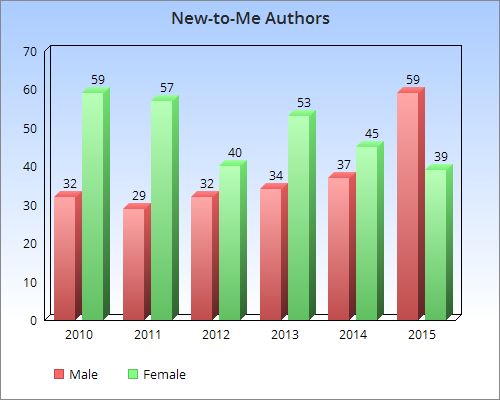 I love reading books set all over the world, so it comes as no shock that I read books that have been translated into English. At the end of 2014, I was not happy to see that the number of translated titles had dropped once again, just like 2012, so I told myself to remember to read more. I did, but I'm still not happy with the numbers. Why? Because I think it's important to read what other nationalities think about their own countries and not just read American viewpoints. It's not all about U.S., you know! 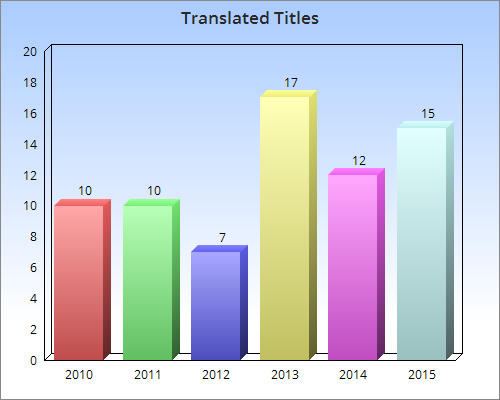 Here you can see how much I went dipping into various subgenres of crime fiction. I did combine police procedurals with private investigators but trust me-- most of those numbers are from police procedurals, and as you can see, that's perennially my favorite subgenre. Cozies tend to come in second. I honestly thought I'd read more Golden Age mysteries in 2015, but at least the number didn't drop. Historical mysteries are still rising slowly, and thrillers just keep dropping. I tend not to read thrillers anymore unless there's something about the hook or the setting that I find irresistible. Where Do I Get My Books?

2012 was the year that broke this camel's back. That was the year I seemed to be on almost every publicist's email list when new ARCs were being handed out-- and I didn't know how to say no. I'm still reading a considerable number, but as you can see, I read more of the books I purchased as well as books I've obtained through Paperback Swap. I think I had to go down the same street as so many other book bloggers-- ARC Lovers Lane-- until I became glutted on them. Since I give advance reading copies priority, saying yes to too many means that I'm reading books that I have to read. Or it feels that way. And it makes me grumpy. I refuse to have reading make me grumpy! 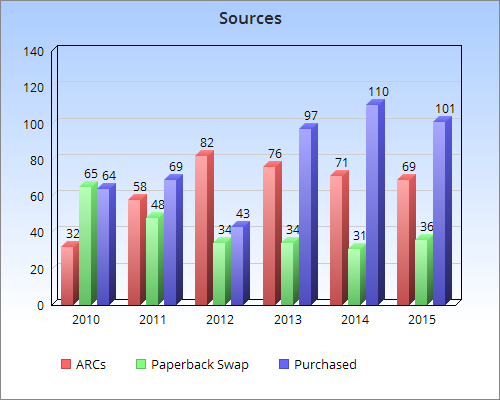 When Were These Books Published?

I think this is about the most telling graph of them all. The overwhelming majority of the books I read have been published in the last five years. I don't know if I'm happy with that or not. It is what it is. The only thing I'd like to see me doing is sampling more Golden Age mysteries now that I've actually found some authors I like. 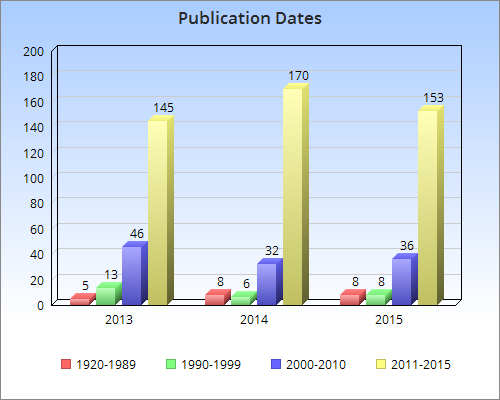 I did this to satisfy my own curiosity, and then I decided to be brave and share it with y'all. Yikes! The only other thing I'm going to say is... can you tell which were the months that I spent a lot of time at The Poisoned Pen? (And no, I'm not going to do the same thing for the yarn that I buy!) 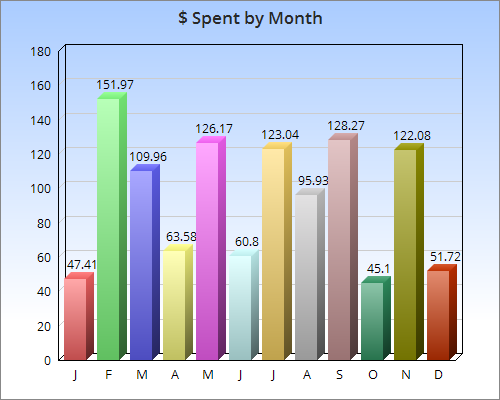 Well, that last graph was such a shocker that I'm going to call it a day-- except for one last link. I always keep track of the geographical locations of the books I read. Last year I tried to embed a map in my statistics post that showed all of the cities I visited. Unfortunately the map did not behave well under blog conditions. If you tried to look at anything, the map would jitter around like it had St. Vitus' Dance. So this year, I'm going to give you the direct link to the map:

Just click on that big Book Travels by City above, and you should be taken to my non-jumping map. I had a friend clear over on the other side of the country take this map for a test drive. The direction arrows should work. You should be able to make the map smaller or larger. You should be able to hover over a red marker and have a book title appear. If you click on a red marker, you should have a white box appear with the book title and location shown. (Don't worry if you see the same book title on more than one red marker; it just means that the book was set in more than one location. And... (drum roll)... the whole thing should not dance around and make your eyes cross!

Did anything from these graphs jump out at you? Do tell, because what you see might've zipped right on over my head! Now I'm going to go hunting other year-end reading statistic posts. I love 'em!