To Helvetica and Back by Paige Shelton 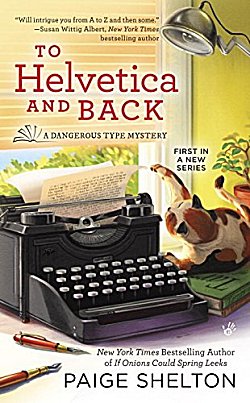 Star City, Utah is known for its skiing, but nestled in a side street in town is a wonderful little shop called The Rescued Word where Chester Henry and his adult granddaughter Clare repair old typewriters and restore old books.

When a stranger comes into the shop demanding Clare turn over an old Underwood typewriter that she's repairing for a customer, Clare has to call the police to get him out of the building. The next time she sees the man, he's lying dead in the alley behind the shop. Why in the world would an old typewriter be worth killing for?

Paige Shelton comes out of the starting blocks on fire with this first book in a new series. Her setting of Star City (a thinly disguised Park City) is perfect: filled with the fascinating sort of history so many old mining towns have, as well as skiing, lots of tourists, quirky residents, and a strong cast of characters.

The mystery is a good one, based on local history, and Shelton had me eating out of the palm of her hand in the sections dealing with rare books. Everything about The Rescued Word fascinated me: the old building it's housed in, the fact that it's turned into a family business with Clare's young niece also working there, how the Henrys have adapted their business with the passing years-- even how Baskerville the ill-tempered cat's favorite napping spots follow the path of the sun from one side of the store to the other.

All of these things provide a strong foundation, but the cast of characters make the entire book shine. Clare is just the right blend of smart, feisty, and capable. Her grandfather Chester is the soul of the business, having built his own Gutenberg press that gave his store its start. Chester loves his family, but he's also got a private life he's not quite ready to share, and that's driving Clare crazy. A handsome geologist named Seth who's new to the area, and Clare's best friend Jodie (who happens to be a local police officer... always a plus for an amateur sleuth) round out the main characters of what's sure to become a favorite new series of mine-- and yours, too.  Bring on book two!