A Specter of Justice by Mark de Castrique 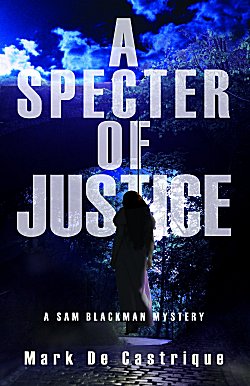 Sam Blackman needs to ease his conscience, so he agrees to help his partner with a fundraiser for orphaned twin boys there in Asheville, North Carolina. The boys' parents were killed in a courtroom shootout where Sam was a key witness against their father.

The fundraiser is a nighttime tour of the legendary haunted sites of Asheville, and it should have been harmless. Instead murders begin occurring which mimic local ghost tales. The police fear some sort of macabre serial killer, but Sam and partner Nakayla don't become involved until all the evidence  begins pointing right at Sam's friend, defense attorney Hewitt Donaldson. These two private investigators firmly believe in Donaldson's innocence, but first they have to discover the killer's motivation. Is it something that happened recently-- or is it a specter from the past?

Mark de Castrique writes compulsively readable books. There's something about the voice of his main character Sam Blackman that commands attention. If that's not enough, the fast pace of the book grabs a reader from the first tragic courtroom scene and won't let go until the final shot of a discarded piece of metal.

Readers have to find out why Hewitt Donaldson is being railroaded, and it's not easy. The man's been very busy for a long long time, and the potential suspect list of people who might hold grudges against him is a long one. But as I said before, it's an intriguing path to the solution, and de Castrique peoples his book (as usual) with characters who don't fit the usual cubbyholes. How many times lately have readers run across a homicide detective who plays well with others and a fundamentalist preacher who isn't portrayed as a complete sleazeball? Not often, eh? This is one of the many reasons why I enjoy de Castrique's books.

An added bonus is learning something about the Asheville, North Carolina area. There's a lot more there than you may think, and I certainly did appreciate learning about some of the city's more haunted aspects this time around.

Sam Blackman and his partner Nakayla Robertson are two of the good ones, and you should seriously consider reading all of their well-written adventures. Do you have to begin at the beginning? No... it's not mandatory, but don't be surprised if you read A Specter of Justice and find yourself looking for the rest of the series!