The Puffin of Death by Betty Webb 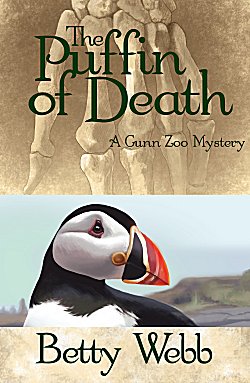 First Line: As he snapped yet another photograph of the black, yellow, and white bird, Simon Parr congratulated himself.

Theodora Bentley can hardly believe that her boss is footing the bill to send one of Gunn Zoo's keepers to Iceland to facilitate the shipment of an orphaned polar bear cub and a pair of puffins back to California. She finds it even harder to believe that she's the lucky zookeeper.

The trip is meant to be a combination of work and play, but when  Teddy finds the body of a murdered man sprawled atop a puffin burrow, she finds herself right in the middle of the investigation. The dead man was a birdwatcher and winner of the largest Powerball lottery payout in history, and when he decided to foot the bill to bring the entire birdwatching club to Iceland, he seems to have brought along his own list of suspects. Once it's determined that an American would best understand other Americans, Teddy has carte blanche to follow the birders... but she's putting herself right in the line of fire.

The Puffin of Death is filled with Betty Webb's fascination with the people, culture, natural beauty, and wildlife of Iceland, and she easily proves that it's a worthwhile country with which to be enchanted. Although the book has a bit less of the author's humor that I'm used to, there are some laugh-out-loud moments-- particularly in describing the romance novels that the dead man's wife writes. Then there's the little thing about the Accidental Incest App to bring a touch of amazement into the lives of Webb's readers.

We get to see Teddy working with the polar bear cub, and getting to know the behavior of the puffins. The information Webb imparts about animals in each book of this series is always choice and heartfelt.

As I read, I discovered that the book is more about Iceland than it is about the mystery, which isn't particularly difficult to solve. Instead I was left with mental pictures of Gunn Zoo owner Aster Edwina's reaction to the bills Teddy runs up while there-- especially those incredibly long transatlantic phone calls she makes to her boyfriend. There's some fascinating information in The Puffin of Death, but it's not the strongest book in this series.