All Men Fear Me by Donis Casey 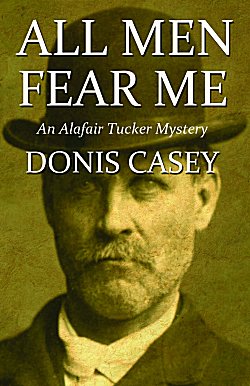 First Line: Old Nick had been following the traveler ever since he left the detention camp back in New Mexico.

The United States has finally entered World War I, and tempers are high. Boynton, Oklahoma, has more than its fair share of "patriots" who are rabidly pro-war and anti-immigration as well as anti-draft socialists who are planning protests and sabotage rather than submit to the draft.

Alafair Tucker already faces more emotional turmoil than she knows what to do with. A son-in-law faces untold dangers simply because he was born in Germany. One of her sons is almost draft age and the other one is foolhardy enough to try to sneak off and enlist. All that is just for starters. Into this walks Alafair's brother. Rob Gunn is a union organizer for the Industrial Workers of the World and fresh out of an internment camp for participants in an Arizona miners' strike-- and although he only wants to visit family, is anybody going to let him?

The Tucker family isn't going to be allowed to ignore the unrest. All the various factions are beginning to fight each other. Sixteen-year-old Charlie Tucker's part-time job in a local brick factory is going to bring his family face-to-face with machinery breaking down, work stoppages, and death.

Alafair Tucker has been likened to Ma Joad in Steinbeck's classic, The Grapes of Wrath. In many ways that is a perfect description, and if she is Ma Joad, her brother Rob is Tom Joad. America's entry into World War I seemingly brings all the world's problems right to the doorstep of small Boynton, Oklahoma, and as author Donis Casey describes the world Alafair Tucker and her family are living in, readers are reminded that things really haven't changed all that much in a century.

One of the things that is so much fun in reading this series is the expansion of the Tucker clan. Alafair's ten children are growing up. The little ones are developing their own personalities. The older ones are getting jobs, moving away from home, marrying, and having children. All this growth and all this change certainly widens the series' perspective, but everything is still filtered through Alafair's eyes.

In All Men Fear Me (a phrase taken from a World War I propaganda poster), there's an older man named Nick who wears a bowler hat and loves to lurk in the shadows to overhear conversations and watch people. He made chills run down my spine. Nick almost seemed imbued with a supernatural evil. Notice I said "almost."  He's not the only well-delineated character in the book. Each of the various factions in Boynton have their representatives, and Casey does an excellent job at bringing them to life. I have to admit to a preference for Emmanuel Clover, an officious little man who's a stickler for the tiniest of rules. He's the type of man born to spike your blood pressure. Mr. Clover loves his daughter Forsythia Lily dearly, and for some reason that girl's name gave me a fit of the giggles each time I saw it.

Sixteen-year-old Charlie gets a lot of the focus in this book, and that young man is a corker. He's full of spit and vinegar and at that age where he's just dying to have an adventure. As a matter of fact it's Charlie who gets to conduct a lion's share of the investigating here-- and it certainly brings out the Mama Bear in Alafair.

Donis Casey's Alafair Tucker series started out very good (The Old Buzzard Had It Coming) and just keeps getting better and better. I feel that I know what life on a farm in Oklahoma at the turn of the twentieth century was like. I now also have a good idea of how the area fits in with the rest of the country in terms of things like culture and politics. I've come to care about each and every member of the Tucker clan, and I'd no more miss a book in this series than I'd stop liking lasagna. If you're in the mood for an excellent historical mystery series, let me introduce you to Alafair Tucker. She's one farmer's wife who knows how to make lighter-than-air biscuits while she's solving the mysteries that cross her path.