The Curse of the Holy Pail by Sue Ann Jaffarian 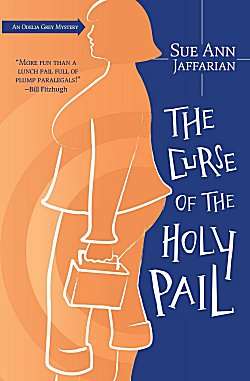 First Line: By the age of forty-seven, I had technically broken nine of the Ten Commandments-- although I'm still a bit fuzzy about the whole "graven image" thing.

The police first come to see Odelia in her office; they heard Price had given her a lunchbox on the day he died. Price did, but Odelia shows them that her lunchbox is definitely Zorro, not Chappy. However rumors persist, and Odelia's research turns up an old unsolved murder and a gold digger whose two biggest assets--despite all appearances-- are not her breasts. Soon break-ins, attacks, and more murder has Odelia working fast to save her own skin.

Sue Ann Jaffarian's Odelia Grey is the type of sleuth that gives most of us ordinary women hope. She's breathing down the neck of fifty, and she definitely has more curves than the airbrushed ideals to whom we're supposed to aspire. But guess what? Age and size don't matter. Odelia has a wonderful romantic relationship, and she's the best paralegal in Newport Beach, California. That she also has a bit of the smart aleck in her doesn't hurt either. When trying to assure someone that she isn't going to investigate Price's death, she refers to what happened to her in the first book (Too Big to Miss): "Don't worry about that. I left my amateur sleuthing behind when I got shot. I've only got one good butt cheek left."

But Jaffarian isn't just about humor (although you've got to read her response to readers who insisted she share her favorite cookie recipe as other authors have done in their books. What a hoot!)-- she also writes some first-rate descriptions, such as "With her gray hair and dull, conservative suit, she reminded me of an old armchair discarded by the side of the road." How can such a simple image make me feel so sad?

Characters, humor, description... and the mystery is a good one, too. There are so many suspects and motives floating around that it takes a while to sort through them all. Along the way we learn about lunchbox collecting, the early days of television, and some of the inner workings of Hollywood studios-- all interesting stuff.

I do have to admit that Jaffarian tapdanced all around two of the things I don't like to find when I'm reading crime fiction. Odelia doesn't always give the police information and evidence as soon as she stumbles across it, although-- thank heaven-- she doesn't wait very long. Odelia is also saved from a TSTL (Too Stupid To Live) moment by the addition of a jaw-dropping sidekick. I have the feeling that Jaffarian was winking at me when she wrote those scenes.

What's my reaction? I'm going to wink right back because the next book in the series, Thugs and Kisses, is on its way to me right now. Jaffarian's sense of humor, her storytelling, and her Odelia Grey are winners!