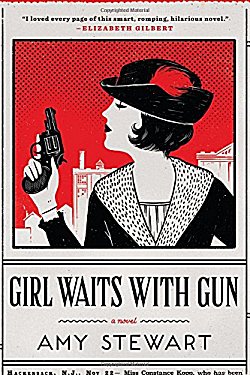 First Line: Our troubles began in the summer of 1914, the year I turned thirty-five.

Fifteen years ago a family secret sent Constance Kopp, her mother, and her two sisters into hiding on a farm in New Jersey. Now Constance is thirty-five. She towers over most men, and if there's one thing she could possibly care less about than marriage, it's the domestic arts. But the world she and her sisters are accustomed to is turned upside down when their buggy is hit broadside by an automobile driven by a rich, spoiled factory owner.

All Constance wants is money to pay for repairs to the buggy, but the factory owner behaves as though she's beneath contempt. Constance doesn't know when to stop, and her requests for payment soon turn into a war when the man turns his gang of thugs on her family and their farm. The sheriff is willing-- when all other law enforcement is not-- to convict all the men for the crimes they've committed, but he needs Constance's help. He gets more than he bargained for.

I'm a fan of Amy Stewart's non-fiction books Wicked Plants and Wicked Bugs, so when I saw that she'd written historical fiction based on the life of a real woman, I was eager to read it. Girl Waits with Gun satisfies on some levels, but not all.

Stewart found the bare bones true story of one of the country's first female deputy sheriffs and fleshed it out by piecing together genealogical records, newspaper articles, and court documents. Excerpts from actual letters are used, and all the newspaper headlines throughout the book are real.

Constance, Norma, and Fleurette Kopp were raised by their deeply distrustful Austrian mother, and it led to a very strange upbringing indeed. Norma seems to have inherited most of her mother's suspicious nature and just wants to be left alone so she can raise her pigeons. Fleurette, much younger than the other two, is pretty, flighty, willful-- a young woman poised to bring all sorts of calamities raining down upon her sisters' heads if she's not put on the right path. Soon. Constance is the most "normal" of the three, but she harbors her own secrets and thwarted dreams which are told in brief flashbacks. The collision with Henry Kaufman's automobile is in many ways fortuitous. It shakes the sisters out of their limbo, and gives them all a good chance to live lives unencumbered by their mother's prejudices.

But as interesting as this all is, the story moves much too slowly and is in dire need of tightening. Weighing in at over 400 pages, Girl Waits with Gun waddles when it should dance. At about the 300-page mark, Constance should've stopped waiting and fired the gun. Then my mere liking would undoubtedly have turned to unabashed enthusiasm.