Death in the Off-Season by Francine Mathews 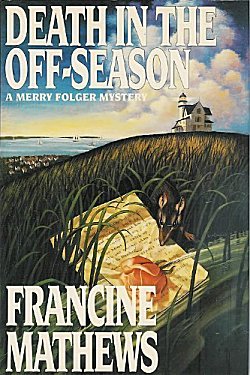 Rusty Mason hasn't been home in over ten years, so no one is more surprised than his brother Peter when Rusty's body is found facedown in one of the cranberry bogs on Peter's farm.

Rusty was persona non grata to Peter, so why on earth was he there? That's only one question of many that Detective Merry Folger of the Nantucket Police Department must answer in her very first murder investigation. And while she's trying to find a killer, she's going to have a lot of people looking over her shoulder and trying to second-guess her: an overprotective father who's also chief of police, a jealous co-worker, an old flame, various suspects... and even Merry herself.

Francine Mathews writes excellent historical thrillers (Jack 1939, Too Bad to Die) that I always look forward to reading, so when a trusted source told me that she'd also written a police procedural series set on Nantucket Island, I knew I had to read at least one. After turning the last page on Death in the Off-Season, I know I'll be reading the rest of the series.

What's to like? First off, there's the setting of Nantucket Island. Although I've always been curious about Nantucket, I'd never read a book set there, so I really enjoyed Mathews' descriptions of the landscape and the weather, as well as information on growing and harvesting cranberries. Since Merry Folger and her family have deep roots on the island, Mathews also includes a bit of Nantucket history and geneaology. None of this is done in a heavy-handed manner, and all of it combines to add a strong foundation as well as charm to the story.

Something else to like about Death in the Off-Season is main character Meredith Abiah Folger. (How's that for a strong New England name?) She's smart, she's strong, and she certainly has good instincts. What holds her back is an overprotective father who also happens to be her boss. His desire to keep his daughter from harm not only makes Merry angry, it also causes her to hesitate, to doubt herself. Fortunately for her, Merry also has a wonderful grandfather who's loving, yet no-nonsense. He listens to her and gives her sound advice. (Now if he'd only set his son straight!) The only thing that appears to be wrong with Merry's grandfather is his tendency to turn their home into an episode of "Hoarders."

Mathews' cast of characters is a very strong one-- not only Merry's family, but several townspeople and friends as well. In fact one of the townspeople on Merry's list of suspects may turn out to be of romantic interest in future books.

Setting? Check! Characters? Check! So what about the story, the mystery, the whodunnit? I have one word for it: brilliant. The plot weaves people and secrets together in such a way that I never saw the identity of the killer coming. Plot? Check!

Now you understand why I want to read the rest of the books in this series, don't you?