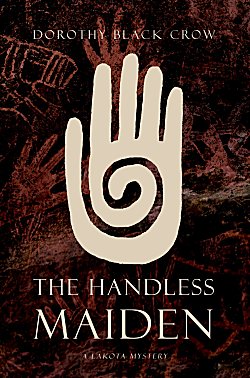 It's 1977 on the Lakota Pine Ridge Reservation in South Dakota, and AIM (American Indian Movement) followers know to be very wary of any law enforcement or government officials. The situation is still volatile even though the siege at Wounded Knee occurred four years before.

When the body of Joanna Joe is found dumped in a ditch alongside a road on the reservation, medicine man-in-training Alex Turning Hawk and his wife Tate are determined to find the truth-- and to find Joanna's missing hands so that she can have a proper burial. But their path is extremely dangerous, with many people both red and white who want the truth to remain hidden.

The Handless Maiden is a fascinating read that illuminates a period of time most whites know very little about. I was in high school during the siege at Wounded Knee, and I remember the news coverage making it sound as though AIM was completely in the wrong. Even at that age, I knew that there was a lot more to the story than we were being told. Author Dorothy Black Crow tells some of that story here.

This story is compelling and strengthened by the fact that Black Crow splits up her two main characters. Alex Turning Hawk has never lived off the reservation, yet he goes to Rapid City to learn what he can. It's not easy, and he has to learn how to fly beneath local law enforcement's radar to avoid problems. Alex's wife Tate was raised in a city as a white person. She stays behind on the reservation, and her task isn't easy either. Many of her fellow Lakota do not trust her and go out of their way to make her life more difficult. Despite any and all roadblocks put in their paths, Alex and Tate do learn the truth about Joanna's death.

As a white, I found reading The Handless Maiden often made me feel like an outsider. I had no problem with that. Some of the Lakota spiritual happenings were difficult for me to accept, and sometimes the language seemed a bit jerky and had abrupt transitions, undoubtedly to show that English was a second language to many of the Lakota in the book.  Black Crow pulls no punches in telling us what law enforcement and government officials were doing on the reservation, but this is not a story in which all whites are evil and all Lakota are saints. This is a powerful tale that shows this woman is a writer. I look forward to her next book and recommend this one to any fellow readers who enjoy Native American-themed crime fiction.