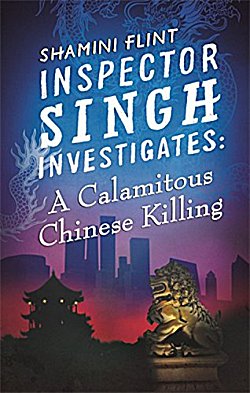 First Line: Justin Tan stood at the main junction of the old hutong, a neighbourhood of old courtyards dating from Imperial times, and stared down narrow alleys that disappeared quickly into darkness.

Inspector Singh is so used to his boss in Singapore shuffling him off to other countries in an attempt to be rid of him that it comes as an (unwelcome) surprise when a high-ranking diplomat demands that Singh investigate the death of her son in Beijing. The Beijing police insist that the young man's being beaten to death in a back alley is nothing but a robbery gone wrong. She doesn't believe it.

Singh is highly skeptical of the whole thing, but once he finds a detail or two that just don't add up, no one can make him stop. But our "plump pursuer of the truth" has no official status in Beijing, and trying to solve a murder in a country that practices socialism "with Chinese characteristics" is a very dangerous business indeed.

Shamini Flint's Inspector Singh series is one of my favorites. Not only does she let me travel to countries that I will never see, she gives me a real feel for each one-- geographically, politically, and culturally. They're perfect for armchair travelers. In some ways Flint's Inspector Singh of the healthy appetite and blindingly white sneakers reminds me of Tarquin Hall's Vish Puri in New Delhi. For one thing, both characters will have you sampling some spicy and delicious cuisines-- and isn't that a fantastic way of having books appeal to all our senses?

As Singh begins to investigate, he quickly learns how difficult it can be to seek truth from facts in a country where rumors are currency. Once again he's going to have to rely on an interpreter, and this time he is blessed with the one he's given: Li Jun, a retired policeman who can help Singh with so much more than just the language barrier. As these two become acquainted with each other, they make quite a team.

As in most investigations, there are several threads that must be unknotted before the truth can be known. The fate of the dissident Professor Luo shocked me down to my marrow and will stay with me, much as a scene from Dominque Lapierre's City of Joy published in 1985 has done. The childless Singh is led to the professor by a brave young woman named Dao Ming, and he meets yet another named Jemima. The way he deals with these girls proves that even though he has no children, he does have a way with them.

The mystery in A Calamitous Chinese Killing was one of putting all the pieces of the puzzle together. The bad guys were easy to spot, but all the whys and hows and whens were the difficult bits. It's a mystery that entertains on many levels and one that evokes many emotions. From the aforementioned horror to humor, as when Singh's "driver weaved between lanes like a fighter pilot avoiding enemy fire." A word of warning: have a box of tissues handy before reaching the end of the book because Singh also manages a very strong tug on the heartstrings, too.

I highly recommend all the Inspector Singh books, but if you're worried about starting yet another series, each one stands alone well. I can't wait to see where Inspector Singh will be headed next.