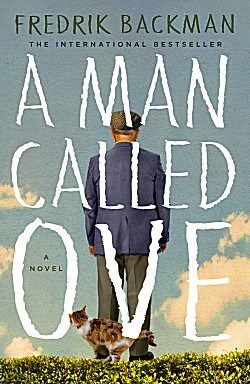 Many people have been saddled with The Neighbor From Hell. Most of Ove's neighbors would feel perfectly comfortable calling him that. Ove is the man who puts a capital C in Curmudgeon. He has strong principles, strict routines, and an extremely short fuse. Ove tends to think that people's reactions to him are because he doesn't go around with a smile plastered to his face all the time, but it's not. Ove can be downright mean.

But there's a story-- and a sadness-- behind Ove's behavior, and it's not until a young couple with two little girls move in next door that we begin to learn just what Ove's story and sadness are. His life is just about to be upended by a flattened mailbox, by neighbors who refuse to be put off by his rudeness, and a homeless cat. Ove-- and we-- will never be the same.

This is a book that I'd managed to ignore for almost a year. When I keep seeing the same title over and over again on the book websites and blogs that I frequent, I tend to go into avoidance mode. Hype makes me suspicious. It wasn't until recently when someone whose opinion I trust recommended this book that I decided to give it another look. Am I ever glad that I did.

A Man Called Ove runs the gamut of emotions: laughter, exasperation, anger, compassion, fear, love, loss. Those new neighbors of his force him to get involved in something other than his own tunnel-vision plans, and as Ove constantly gets yanked into the lives of others, his backstory is slowly revealed. That backstory makes all the difference in the world because we get to see Ove as a child, as a teenager, as a young man-- and we see why Ove became so mean-spirited.

Some may dismiss A Man Called Ove as a simple "feel good" story. Yes, it does make the reader feel good, but that assessment sells this book short. It is a wonderful characterization and examination of a man's life. It just may get some of us to re-evaluate the curmudgeons in our own lives.

I was stunned to learn that this is a debut novel because it certainly doesn't read like one. I could ramble enthusiastically for several more paragraphs, but I won't. If you've been avoiding Fredrik Backman's book because of the hype, stop. Pick it up and read it. My only warning? Have a family-size box of tissues close at hand when you near the end. You will be crying. Crying for sad... and crying for happy.