Winter of Secrets by Vicki Delany 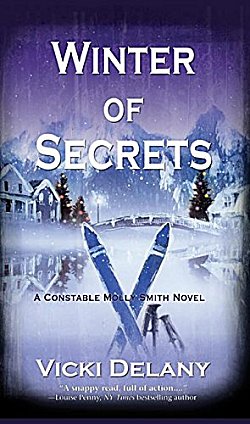 First Line: They don't often get big snow storms in the Kootenay area of British Columbia.

Rich college kids enjoying some skiing over Christmas break come to tragedy when the car two of them are traveling in overturns, skids off the icy road, and ends upside down in the frigid river on Christmas Eve.

What's believed to be an accident proves otherwise during the autopsies of the two young men, and sends Constable Molly Smith and Sergeant John Winters on a search for the truth in a world of privilege and secrets.

Trafalgar is hit with the snowstorm of the decade, and Delany uses the weather and her setting to excellent effect. Molly even gets to ski several times, and the author took me right out on the slopes with her.

Readers are faced with a story of wealthy, entitled people and how they can so easily and carelessly destroy lives. It didn't take long for me to see that Winter of Secrets isn't really a case of whodunit, but of why and how.

As usual, Delany's excellent cast made me forget that I don't particularly care for books that prominently feature the rich and shameless. Constable Molly Smith has good instincts, but she's still learning and still making mistakes. These blunders can infuriate her mentor, Sergeant John Winters, but for the most part he is able to bite his tongue and count to ten. Why? Because he sees her potential as a police officer. Does Molly know when he's extremely angry? Yes. Does she know when she's done something stupid? Yes. But Winters is smart enough to know when to take a step back and let Molly castigate herself. Of course he's using that time to cool off, but at least he knows to back off! Something else that makes Winters stand out from the crowd is that he is happily married to a highly regarded model. Those two occupations in one marriage just don't seem to belong, do they? But this marriage has been working for years. I find Winters every bit as fascinating as I do Molly.

Molly's mother Lucky always seems to find her way into each investigation as well. This time the outspoken woman is trying to help Lorraine, a teenage girl whose parents care more for booze than they do their own children. Lucky is a former hippie who hasn't lost one atom of her convictions. As a result, she doesn't care for the police, so Molly's choice of career does not set well with her-- and probably never will. But each time Lucky finds her way into these investigations and sees her daughter in action, she gains a bit more understanding. This is a relationship that I enjoy watching. Will mother and daughter ever see eye to eye? Only time will tell.

Delany's story and pacing flow so well, her characters are so interesting, that her books read much too quickly. I always look forward to the next book with a great deal of anticipation, but with a threat looming in Molly's future, I know it won't be long until I begin reading Negative Image. If you haven't read one of Vicki Delany's Smith and Winters mysteries, treat yourself. They read well as standalones, but I wouldn't necessarily recommend it. I'm enjoying the character development way too much!