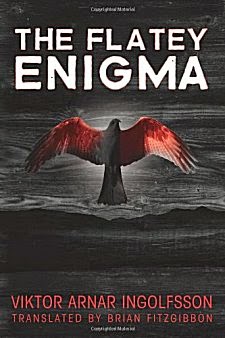 First Line: An easterly wind swept across Breidafjördur with the break of dawn, and a sharp spring breeze intensified the foam of the waves breaking on the strait between the Western Isles.

After three seal hunters find a body on a tiny deserted island off the western coast of Iceland, the district magistrate's assistant is sent to investigate. It's 1960, crime is very low in that area, and it's best not to send for the police from Reykjavik unless it's absolutely necessary.

When it's learned that the body is that of a missing Danish professor, some of the talk amongst the villagers turns to the Flatey Enigma, a set of questions based on the ancient Icelandic text that the professor was trying to solve. Just when the magistrate's assistant, Kjartan, feels that he's getting close solving the professor's death, another body is found-- this time mutilated in the ancient Viking tradition of the blood eagle. The police arrive from Reykjavik, but Kjartan knows that he and the villagers still have the inside track on solving the crimes.

Although the professionals from Reykjavik are finally sent for, it's the amateurs who really do the lion's share of the murder investigations in The Flatey Enigma, and I found following them around this remote area of western Iceland to be fascinating. As villagers are interviewed, as they help guide the magistrate's assistant from place to place, the reader learns a lot about the customs and food of Iceland in 1960. I have to admit that I tended to skim over the menus quickly because roast puffin breast and baby seal stew just don't appeal to me, but the food people eat says a lot about them, and it certainly does here.

I deduced the killer's identity early on, but I still enjoyed following the investigation because I was learning so much about Iceland. Each chapter in the book ends with information about the Flatey Book (which actually exists), ancient Icelandic legends that are contained within its vellum pages, and finally the forty enigma questions themselves. Sometimes inclusions like these interrupt the narrative and are annoying. They certainly weren't in this case.

Sometimes when I read a mystery, what I reap is so much more than solving a crime, and this is what happened when I read The Flatey Enigma. Yes, the mystery is interesting, but I feel as though I learned a great deal about the customs and the people of an area of Iceland far removed from its capital of Reykjavik.