At the Drop of a Hat by Jenn McKinlay 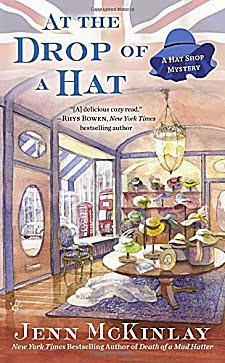 First Line: I stood at the counter of Mim's Whims, the hat shop my cousin Vivian Tremont and I had inherited from our grandmother Mim, and I gazed out the window.

Cousins Scarlett Parker and Vivian Tremont are thrilled when Ariana Jackson brings her mother's wedding hat to Mim's Whims to be repaired. The beautiful creation was made by their grandmother, and they can't wait to restore it to its former glory for Ariana's own wedding. But when Ariana doesn't return any of Scarlett's phone calls, Scarlett goes to the office where the young woman works... just in time to hear a scream and find Ariana standing over the dead body of her boss. With Ariana in custody, Scarlett and Vivian know they have to work fast in order to get this young woman to the church on time.

Although I found myself displeased with Scarlett's behavior in the previous book in the Hat Shop series, I am thrilled to report that she didn't raise my blood pressure once while I read At the Drop of a Hat. As a matter of fact, this is the strongest book in the series so far, and I'm definitely looking forward to more.

Scarlett's tied up in knots over the vow of celibacy she took after her last disastrous relationship-- mostly because of the excellent replacement she's found in Harrison Wentworth. Her jealousy is still there, but since Harrison seems very content to wait for the year to be over, Scarlett can keep it under control, and as a result, my enjoyment factor skyrocketed.

From the Pun Wars the characters hold whenever they're together, to the friends like Andre and Nick that Scarlett have made, this series really feels as though it's hit its stride-- and the mystery is a darned good one, too.

As I read the opening of At the Drop of a Hat, I was struck by two things: (1) with the description of the setting being gray, gray, gray, I was reminded of the opening of Charles Dickens' Bleak House and its fog, fog, fog, and (2) that the author was inside my head because just as I thought, "Wait a second, she's in London. Everything would be grey!" here McKinlay is with "Or as the Brits like to spell it, grey."

Yes, this author's books are so much fun to read, and I look forward to finding out what's going on at Mim's Whims next!