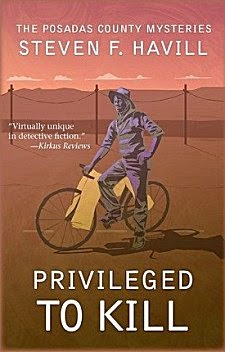 First Line: I saw Wesley Crocker for the first time on a cold Thursday afternoon in October, three weeks before Election Day.

Posadas County Undersheriff Bill Gastner sees Wesley Crocker walking his flat-tired bike alongside the road and gives him a ride into town. No job, no car, no bath... Crocker is the first person all the townspeople suspect when the body of 15-year-old Maria Ibarra is found underneath the bleachers at the high school. Gastner feels the man is innocent, and thus begins a non-stop investigation for this old cop who eats too much Mexican food and gets too little sleep. The only thing standing between Bill Gastner and a murderer is the very real possibility of a heart attack.

I love this series, and it would be extremely easy for me to sit down and read each book one right after the other. But I don't. I make myself parcel them out one at a time-- almost like giving myself a gift every six months or so.

What makes this series so good? Just about everything. Fictional Posadas County, New Mexico, is right on the border with Mexico. Havill uses the landscape and the weather to paint in details of his setting, but he also uses situations that arise with our neighbor to the south. In the case of Privileged to Kill, it's the sad fate of Maria Ibarra, an illegal immigrant who's come from Mexico to get an education and a future only to die an ignoble death. It's details like this that make Havill's stories ring true.

Then there's always some sort of science/technical angle that's downright intriguing-- like the car wreck in this book. I know that not everyone is interested in such things, but not to worry. The author doesn't bog down the story with these facts. He uses them to add some spice to the investigation.

Hands down, the absolute best part of this book-- and the entire series-- is the cast of characters. Bill Gastner isn't in the best of health, but he's just the kind of tough old cuss who's going to die in harness. He doesn't know when to quit. He usually has his breakthrough flashes of inspiration when he's had the least sleep... and he's compassionate. Most people would drive right on by Wesley Crocker, but not Bill Gastner. He stops. He talks with Wesley for a minute or two, then he helps load the bike into the trunk of his patrol car and gives Wesley a ride into town as well as tips on places to eat and sleep. Bill's the type of man who's going to give everyone a fair break.

We also get to see Gastner mentor his boss. Sheriff Holman has a lot to learn, and he's smart enough to pay attention to his undersheriff. Most of the time. The same can't always be said for Pasquale, the new deputy. Gung-ho Pasquale wants to make a name for himself, and that just might wind up getting him killed. Gastner knows this, and I liked watching how he worked with the younger man.

Gastner's wife is dead, and his four sons live far away, but he is not without family. Adopted family. Deputy Estelle Reyes-Guzman and her doctor husband are valuable additions to the town of Posadas, and they care about Gastner as much as he cares for them. It's a pleasure watching Estelle and Gastner work together. Also, the lives of these three main characters grow and change with each book. Can you read this book as a standalone? Yes, you can, but if you love excellent characterizations, start at the beginning and savor each one.

I could ramble on forever. I love Havill's characters. I love the way he brings New Mexico to life. I also love how his stories are so simple on the surface (like the one here in Privileged to Kill) yet have real depth. Steven F. Havill's Posadas County mysteries truly deserve to be bestsellers instead of the hidden gems they tend to be. I highly, highly recommend them.