In the Midst of Life by Roger Silverwood 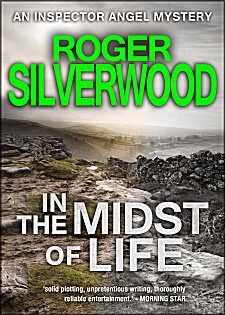 First Lines: It was 9 a.m. Nurse Derri Evans, aged twenty-five, loaded a hypodermic with one millilitre of equinol.

A dead woman has been found in Yorkshire on Detective Inspector Michael Angel's patch. There's not much to go on, and Angel's preferred detective sergeant is off on a training course. It's not until a woman comes to the station asking for the police to find her missing sister that some of the pieces of evidence begin to come together.

With a new cadet and a rather lackadaisical stand-in detective sergeant, Angel has to solve a case that has its roots in a murder committed twenty years ago. It's not going to be easy, and time is running out. Angel has to work fast before the body count rises.

This first Inspector Angel book has promise. I really enjoyed the mystery. It kept me guessing until the end-- when I discovered that my deductions were all wrong. I've read a lot of crime fiction, so I always like it when an author pulls the wool over my eyes.

Inspector Angel is definitely the star of this show. He's as stubborn as they come, he likes to shout, and a lot of his humor contains dated references that zoom right over the heads of the sergeant and cadet who are working with him. Since I understood his humor, I found much of it to be genuinely funny.

But there are a few kinks that need to be ironed out. Angel is a strong character, but it's not always for the right reasons. I got tired of his shouting. He "pursed his lips" so much I began to fear that he would be forced to face the world with a permanent pucker. And I most certainly did not care for the way he treated the cadet working with him. Early on the cadet proved himself to be hard-working and self-motivated, and Angel did mentor him a bit, which was good to see, but Angel also treated the poor young man as a lackey-- making him go out frequently for groceries, to make restaurant reservations, get his lunches, and the like. Since the cadet is an Indian, and Angel refers to him as "Sabu," a case could be made for bigotry. At least he treats Detective Sergeant Crisp no better... and sometimes worse.

Halfway through the book, I suddenly thought to myself, "Where are all the females?"  Throughout In the Midst of Life, the only females making an appearance are victims, victims' relatives, witnesses, and suspects. Not a one was in police uniform. Rather strange for a police procedural set in 2002.

Silverwood has written a strong mystery that I did enjoy, but the problems I had with Inspector Angel leaves me doubtful that I will be returning to read more of the series.