Played by the Book by Lucy Arlington 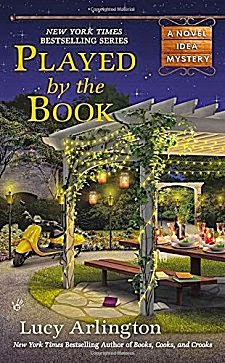 First Line: I was completely engrossed in reading my latest proposal, a cozy mystery set in a charming English hamlet, when a couple of specks of dirt fell across my paper.

Damian York, former local boy and now a popular television show host, has returned to Inspiration Valley, North Carolina, and the owner of the Novel Idea Literary Agency is thrilled. York will be touting his new gardening book, and Bentley Burlington-Duke is filled with ideas for a splendid garden party launch. All of those ideas are immediately placed on Lila Wilkins' to-do list.

Lila is spread too thin. Before it was known that York was coming to town, she had little time to spend with the man in her life; now she's got a huge party to plan, and she has to get her yard spruced up for the town's annual garden walk. That garden walk's going to have to be put on hold however, when Lila finds a skull in her flowerbed. With that grisly discovery, secrets begin bubbling to the surface in Inspiration Valley, and Lila has one more item on her to-do list: find a killer.

I've enjoyed this series since its inception. Lila Wilkins is a smart, optimistic, talented woman who grabbed the chance to follow her bliss. She's found it at the Novel Idea Literary Agency and in the arms of a police officer named Sean. Lila's job is one of the many reasons why I enjoy this series; I love learning how a literary agency works. Having Damian York be an expert in landscaping, interior design, and food was icing on the cake because I'm extremely interested in all three-- as long as I'm not expected to be in charge of the third.

In this fourth book, the author deals with the Cabot Cove Syndrome-- what happens when a small town has recurring dead bodies. Lila is now known as the "murder magnet" since she's always the one who stumbles over the corpses. She is not happy with her new nickname. In fact, Played by the Book reminded me so much of Cabot Cove that I almost immediately knew the identity of the killer.

But knowing that is small beans in a character-driven mystery, and Arlington has delivered a fine cast of secondary characters, from Lila's son, to the man in her life, to her mother, to her best friend, and on to the people with whom she works. An interesting group of people living and working in an idyllic town-- perfect weekend reading.

But by the end, I had a strong feeling that this is the last book in the series. There was no preview chapter of the next book, and throughout Lila seemed to be paying more attention to tying up loose ends with all the most important people in her life than she was in solving the mystery. If this is indeed the case, I will be sorry to see the series end, but I'll also look forward to finding out what Lucy Arlington has in store for us next.