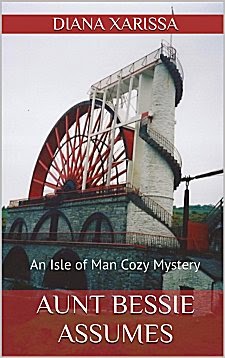 First Line: Elizabeth Cubbon, known as Bessie to her friends, rubbed her eyes and checked the clock by her bed.

Not one to divulge her age, Aunt Bessie is somewhere between a free bus pass (60) and receiving a telegram from the Queen (100). For most of her life she's lived in a small cottage on Laxey Beach on the Isle of Man. She's known for giving a room and a meal to any child in the area who may be having difficulties with parents, but this sharp lady is no pushover.

While Aunt Bessie may be used to taking a morning constitutional on the beach, what she's not used to is almost tripping over a dead body while she's doing it. She contacts the police, and when they arrive she tells them that she thinks the man died of natural causes, but a knife is found in his chest, and it's officially a murder. When a second body turns up, Aunt Bessie wants the police to wrap things up and find the killer as quickly as possible. She has no desire to be victim number three.

Having never read a mystery set on the Isle of Man, I really looked forward to Aunt Bessie Assumes, and for the most part I was not disappointed. The Isle of Man may be a UK Crown dependency, but it is a country in its own right with its own language and customs. Fortunately author Diana Xarissa realized that many of her book's readers would want to know more. She included a glossary with some basic Manx (the language of the Isle of Man) words and phrases as well as a section translating British English to American English. She also explains some common UK terms like "4-bed semi," "license fee," and "charity shop." This is one book that won't leave American readers in the dark if they are unfamiliar with British terminology.

Aunt Bessie is an active, observant old lady with just a touch of the curmudgeon. I loved her. She has the perfect arrangement with the bookshop in Ramsey, and she's known to one and all. In fact, she has her fingers on the pulse of all the "skeet" (gossip) in the area, and when the new Detective Inspector Rockwell finds this out, he begins coming to Aunt Bessie for her insight. I have to admit that I enjoyed having a police officer in a book who is willing to use the knowledge that is put in his path. Yes, Xarissa has created a strong cast of characters that I want to know more about.

Unfortunately there were a couple of things in the book that lessened my enjoyment. In the last two-thirds of the book, I lost count of the number of times Aunt Bessie grinned. "Grin" and "grinned" were ferociously overused in the book.

The wrap-up of the investigation also had a couple of holes in it. (1) Why on earth would a police officer on a stakeout leave the stakeout to go grocery shopping? (2) Why would another police officer look through a window and just watch while someone is being killed? Those two things don't make sense.

But no matter how many times Aunt Bessie showed me her teeth, and despite the nonsensical actions of two police officers, I still enjoyed this book because of its setting and because of Aunt Bessie and her friends. Excessive smiling can be fixed. So can holes in an investigation. Aunt Bessie has great bones, and I'll be reading the next book in the series.