Island of Bones by P.J. Parrish 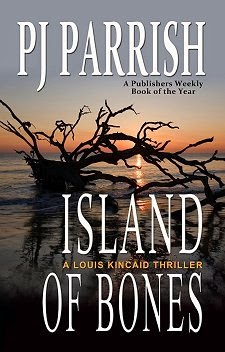 First Lines: Dark. It was so dark. She could see nothing.

It's 1987, and former cop-turned-private investigator Louis Kincaid has been hired by a woman who thinks her father may be responsible for the disappearances of several women spanning the past thirty-five years. Since a young woman's corpse has just been pulled out of a mangrove swamp, Kincaid is interested, and his investigation soon takes him to the Island of Bones, one of many small islands west of Fort Myers, Florida. His search soon lands him in an age-old nest of secrets and lies from which he just might not return.

As I began reading Island of Bones, I loved the description of the landscape, and I enjoyed the sense of history associated with all those small islands off the coast of Florida. However, I felt as though I'd gotten off on the wrong foot. Perhaps I should not have begun this particular series with book #5 because I felt there was a whole lot of backstory behind Louis Kincaid that I was unaware of-- to the point where his character never really captured my imagination or interest. His contact on the local police force, Mel Landeta, was different; I took to him almost immediately.

There was more bothering me about this book the longer I read. The motivations of the woman who hired Kincaid to follow her father never really set well with me. I had the feeling that she had some hidden agenda that she wasn't sharing. Although I did like the sense of history that permeates those small islands, I wasn't in the mood for the convoluted mess that masqueraded as family history on the Island of Bones.

All in all, even though the writing was good, the setting was excellent, and I did like a couple of the characters, Island of Bones just wasn't my cup of reading tea-- but that doesn't mean I won't be sampling P.J. Parrish's writing again. In fact, I think I'll look up the first book in the series....