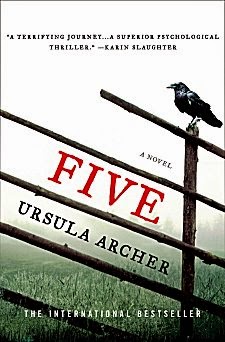 First Line: The place where his left ear used to be was throbbing to the rhythm of his heartbeat.

Detective Inspector Beatrice Kaspary has so many personal problems that they hang from her neck like a millstone. Her woman-hating boss loves to browbeat her with them when he's not covering her computer monitor with Post-It notes. An abusive ex-husband. Guilt over her parenting skills. An almost all-consuming dedication to her job. A small son who's begun acting out. Those comprise just the tip of the iceberg. When the body of a woman is discovered in a meadow outside Salzburg, Austria, all those problems are going to have to be shoved aside. Crudely tattooed on the soles of the dead woman's feet are GPS coordinates to yet another grisly discovery-- and it won't be the last. Kaspary and her partner Florin Wenninger are going to have to learn all they can about geocaching as quickly as possible because a killer has set a five-stage plot in motion. How on earth are they going to be able to get ahead of the killer when they have no idea what his motivations are?

Two things about Five attracted me immediately: the geocaching angle which I had never come across before, and the setting of Salzburg, Austria. I knew a little about putting map coordinates into a cell phone in order to go on "treasure hunts" so I knew that this could certainly add a cat-and-mouse quality to the investigation, and it does. The pitfalls of following the coordinates? The police can become so focused on the search that they forget to try to get ahead of the killer in order to stop the murders. Kaspary is aware of this danger, but the clues are few and far between.

Yes, I did like this investigation. A lot. Not just the geocaching, but watching how Kaspary and Wenninger work to find the killer-- all the way to the final reveal of the killer's identity. I haven't been so surprised over learning whodunnit in a long time, although hindsight proved that I should not have been. From time to time Archer gets bogged down in the details and it slows down the story, but it's still an enthralling read.

If you're the type of reader who prefers police procedurals that focus on the investigation and have little to do with the private lives of the detectives, you may want to give Five a miss. Kaspary's background is integral to the story, and it's revealed slowly. The subplot involving her abusive ex-husband-- although crucial in showing us Beatice's character and what she has to deal with-- was the least palatable of them all, and it should be dealt with swiftly so it won't become detrimental to the health of the series. (Yes, I'm hoping to read more.)

Of the two main characters, I preferred Wenninger and would have loved to learn more about him, but Five is Beatrice's show, and we rightfully get to learn about her first. There's an attraction between the two that will be very interesting to follow in any future books.

Ursula Archer is a science journalist and an award-winning author of books for children and young adults. Five is her first adult mystery, and I am definitely looking forward to more.