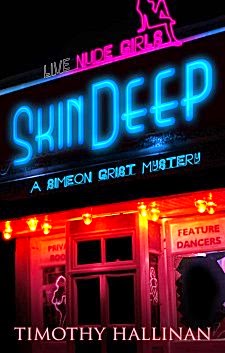 First Line: In that crowd, Mr. Beautiful and the Korean girl shimmered like millionaires in disguise, minor gods slumming incognito.

It's bad when you really need the money and the only job you can get is one you definitely don't want. Private investigator Simeon Grist is down to his last dime; otherwise, he would not accept the job of playing watchdog/nursemaid to Toby Vane, the sweetheart of prime time television. Toby has a secret that could bring ruin to his fame and fortune: once in a while he likes to beat up a woman-- and almost any woman will do.

When some of the women who hang around Toby start turning up dead, Grist needs to find out if he's protecting a killer, or if one of Vane's enemies is setting him up to take a hard fall. When the beautiful Nana appears on the scene, the whole thing turns extremely personal within the blink of an eye.

When you love two series that an author has written and you discover that he's written a third, you're going to go out of your way to find the books in that unsampled series. That's what I did when I found out that favorite author Timothy Hallinan had written the Simeon Grist series well before I fell in love with his others featuring Poke Rafferty and Junior Bender.

What I found in Skin Deep was a beginning effort by someone who was trying to make his writing fit into the standard P.I. format. Skin Deep has its problems, but it shows a lot of promise and hints of Hallinan's later heroes, Poke and Junior.

The pacing of the book was slow at times and could've been tightened up, and although I liked Simeon, there wasn't enough background on him. (Probably rule #1 in the P.I. author's handbook: Never give too much away about your hero.) I have to be honest here and say that what I disliked most about the book are things that I usually don't like about P.I. novels-- everyone seems to be a sleezeball, the violence, and that arch tone that makes me grind my teeth. So if you love the standard private eye novel, chances are you're going to enjoy this one a lot more than I did.

What I did enjoy was catching so many glimpses of the writer Hallinan was soon to become. He is a writer who doesn't really fit within the confines of any one standard genre, and it took him a little time to figure out how to turn things to his (and our) advantage. The unconventional-- yet very satisfying-- solution reminded me of things Poke Rafferty and Junior Bender would do in future books. And-- like Junior Bender-- Simeon Grist knows Hollywood gossip, legends and history. On the surface, Simeon Grist looks and maybe even sounds like one of those 1930s tough guy gumshoes, but down deep he has the soft heart and smarts of those two Hallinan characters I've already mentioned.

Skin Deep may not have been a completely satisfying read for me, but I did enjoy going back to see one of my favorite writer's "origins."