The Murder of Harriet Krohn by Karin Fossum 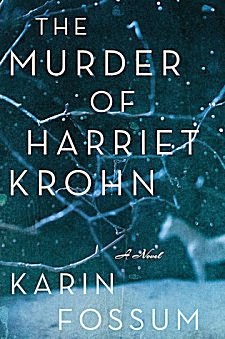 First Line: Dearest Julie, Do you read my letters?

Desperate to pay off his gambling debts, Charles Olav Torp ("Charlo") does the only thing he can think of: rob an elderly woman of her money, jewelry and silver. It's a robbery gone horribly wrong. Sure, Charlo's got enough cash to pay off his debts and to curry his teenage daughter's favor by buying her the horse she's always wanted, but Harriet Krohn-- the elderly woman with the money, jewelry and silver-- will always be dead.

Charlo's got to live with that woman's murder on his conscience. He's got to turn his life around and become the good person that he knows he really is. After all, the only reason why his life became such a mess is that he can never catch a break. Charlo doesn't have much time left to change his life because he left behind one clue at the crime scene, and Inspector Konrad Sejer-- who's successfully solved each and every one of his cases-- is working that one item for every scrap of information it can provide. Charlo's feeling lucky, but it doesn't pay to underestimate Konrad Sejer.

Anyone who picks up The Murder of Harriet Krohn and expects to read a typical Konrad Sejer police procedural is in for a rude shock. This seventh book in the series is told from the killer's point of view. At the beginning, this is a successful ploy as we get to see just how messed up Charles Olav Torp's life is, how he's ruined his relationship with his 16-year-old daughter, how far he's willing to go in an attempt to straighten everything out-- and ultimately how self-deluded he is. Harriet Krohn isn't particularly sympathetic as a murder victim. She's abrasive, judgmental, and wrapped in a thick batting of entitlement. No, this book is all about Charlo... and the Sejer-sized shadow that looms ever larger in the background.

I've read the other books in Fossum's marvelous series, and as Charlo committed robbery and murder, I mentally cataloged each clue that he left for Sejer and his team to find. As certain things were released to the press, I smiled because I knew the inspector was closing in, and it certainly was interesting to see an interrogation through the killer's eyes. But Charlo just wasn't the right character to carry the entire weight of the narrative. Perhaps if he were an intelligent sort of killer capable of playing cat and mouse with a worthy adversary like Sejer, but he isn't. Charlo isn't particularly smart; he's self-centered, whiny, and pathetic, and after a while all his whining, all his complaints, all his justifications have gathered enough strength to pull a reader's interest right down into the dust.

It wasn't until I'd had time to digest this book a bit more that I felt a chill moving up my spine. Most criminals are exactly like Charles Olav Torp. They're not very smart. They can never accept responsibility for their own actions. They whine and complain. The Murder of Harriet Krohn may be Karin Fossum's warning to us all: Be careful. There are many more Charlos out there than we can ever realize, and they're all bringing their clouds of disaster with them. To share.