Off Kilter by Hannah Reed 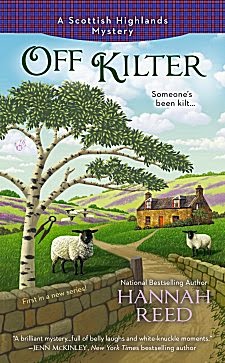 To say that life's been tough for Eden Elliott would be an understatement. The long-term care of her seriously ill mother put an end to her marriage. The divorce is final, and now her mother is dead. Eden's made a deal to write a romance novel, but she feels as though she needs some sort of jumpstart. That's where best friend-- and bestselling romance author-- Ami Pederson comes in. Ami sends Eden on an open-ended visit to the village of Glenkillen in the Scottish Highlands. There Eden plans to do some firsthand research and start writing that book. But fate has other plans.

The local sheep shearer has been murdered with his own shears, and the villagers in Glenkillen suspect Vicki MacBride, an outsider whose surprise inheritance of her father's estate put the future of her half sister and her brother-in-law in serious doubt. But Eden can't believe that her new friend is capable of murder, so in between bouts of research and writing, Eden determines to do what she can to catch a killer.

I simply had to read this first book in the Scottish Highlands cozy series because of its setting. Although I never did quite figure out where Glenkillen is supposed to be, I certainly enjoyed my vicarious trip to an area I love so much.

This first book sets the series up well. Everything about the murder is leading us to believe that the evildoers are Vicki's half sister and her brother-in-law, but sooner or later readers are going to wonder if that solution is a bit too obvious. Or could it be meant to look obvious?  Hmm.... I began to wonder about that from the beginning and found the solution rather easy to deduce, but I was enjoying watching Eden Elliott try to adjust to the Highlands too much to care. (Which goes to show that there's always more to crime fiction than the answer to whodunnit.)

Eden is thirty-eight. After caring for her mother for so long, she's not flighty and she has common sense. I wouldn't say that she's all that mechanically inclined with her talk of "whatchamacallits," "thingamabobs," and "doohickeys," and it puzzled me that she didn't do a little bit of research before she headed off on her first-ever trip outside the U.S. For example, she flies into Inverness where she picks up a rental car to drive to Glenkillen. Only then does she learn that you have to reserve a car that has automatic transmission-- and those cars are at a premium. Being stuck learning a stick shift at the very same time that you're trying to remember to drive on the opposite side of the road and navigate roundabouts is not a recipe for success. The bright spot in all this is that a handsome Scotsman comes to her rescue when she becomes stranded.

The further along Eden gets in her investigation, she finds herself with two handsome Scotsmen giving her the eye, and I have to admit that-- although I'm not much for romance in my reading-- Eden's two men are the best romantic interests I've encountered in a long time. (I may not care for romance in my books, but I'm not dead.) And as far as that investigation goes, my liking for Eden increased because she kept the detective inspector handling the case in the loop with everything she finds. That inspector happens to be saddled with a particularly annoying special constable, and his attempts to avoid the young man not only become a running joke in the book, the situation also has Eden becoming more involved with the local people and the community.

At the beginning of Off Kilter, that little village of Glenkillen had me worried because when Eden first comes on the scene, it's definitely a case of us (the villagers) versus her (Eden), but as they all get to know each other better, this changes, which is a very good thing for the book and for the series.

Off Kilter has definitely "primed my pump" (so to speak) for more books in this series, and I'm also secretly hoping that Eden has to make a trip to certain areas of Glasgow, where the Scottish accent really is almost impossible to understand!