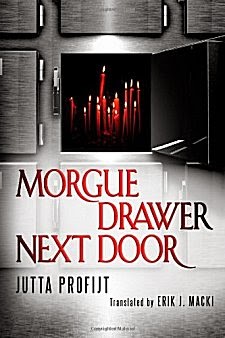 First Line: I'm going to start this account with an incident that occurred before the plot of this book even began.

One of the worst things about being a ghost-- at least to former car thief Pascha-- is the loneliness. Medical examiner Dr. Martin Gänsewein has returned to work, but he still wishes he weren't the only person who can hear Pascha, and he's started trying to invent things that will make the young ghost keep his distance. Even Pascha's morgue drawer is occupied by a different body.

Things start looking up when Marlene is brought to the morgue drawer next door, but she's not the leggy blonde Pascha was hoping for. Marlene is the spirit of a nun who was killed in a fire that destroyed a wing of her medieval convent and home there in Cologne, Germany. Even though Marlene spends way too much time praying in the hospital chapel, Pascha does empathize with her because he believes that she was murdered. Now the two ghosts are determined to find the nun's killer, but there's only one problem: they can't do it without Martin's help. Yes, Martin... the man who wants to go back to the good old days when he knew ghosts didn't exist.

When I read the first book in this series, Morgue Drawer Four, I wondered just how long this premise would be able to last. After all, pairing the ghost of a poorly educated, outgoing young car thief with a highly educated, introverted and meticulous medical examiner does sound gimmicky. I'm happy to say that the premise is alive and well in this second book. The author keeps her idea fresh by changing it up a little. Martin is pretty much kept in the background, although he is at the heart of a running joke about his ghost-busting inventions. Instead, Martin's girlfriend Birgit has a much bigger part in the action-- and she plays her role well.

Of course, the biggest change is bringing in a nun to pair with the irreverent Pascha. Marlene is such a polar opposite to the young man that it's fun to watch them get used to each other and finally begin to work together. While Martin remains a rather static character, Pascha does not. From being in the presence of people with much stronger morals and much more education than he's used to, readers can see how his language changes, how he thinks things through, and how his natural inclinations for compassion and doing what's right are growing stronger. It seems as though Pascha has to earn his wings before he can step into the light.

One scene in Morgue Drawer Next Door did not work for me. Pascha, Marlene, and Martin's girlfriend Birgit have gone off to try to catch a killer while Martin stays at home to work on an invention. I won't go into detail about the scene, but Martin's behavior just does not ring true to his character.

On the other hand, Pascha and Marlene find themselves in a situation that's familiar to crime fiction readers: they know whom the killer is, but there's no proof and a very real chance that the person will go free. However, these two crime fighters have a few tools unavailable to us mortals, and how they set about to force the murderer to confess is absolutely hilarious.

Jutta Profijt is proving to be a writer who can think outside the box-- and one who can make me laugh out loud as I read her books. I'm definitely looking forward to continuing with this series.