To Dwell in Darkness by Deborah Crombie 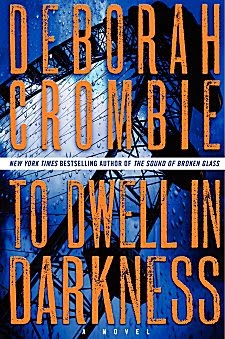 First Line: In the first moment of waking, he had no idea who he was.

After a deadly grenade goes off in historic St. Pancras Station, Superintendent Duncan Kincaid and his new murder investigation team take charge. Fortunately they have help. Gemma's colleague and friend, Melody Talbot, witnessed both the protest and the subsequent explosion. When interviewed the protesters insist that the young man who was killed was only supposed to set off a smoke bomb. Since the grenade went off in an historic building with loss of life, Duncan and his team are working with an anti-terrorism unit, and it is imperative that the case is solved as quickly as possible.

Long-time fans of Deborah Crombie's wonderful series might find To Dwell in Darkness a bit of a mixed blessing. In the "good" column is no longer having to wait for the next book and to be rejoined with the best married police officers in all of crime fiction. In the "not-so-good" column is a lack of the richness and depth of story that fans have come to expect.

Most of the rushed quality to this book is due to its time frame. This is the most thriller-like of all Crombie's books, with the action taking place in just four days. A lot has to happen in a short period of time, and that means that all those secondary characters who add so much to the series are scarcely seen or even mentioned. I missed them, as I'm sure other readers will.

Another thing that will drive some readers absolutely wild is that Duncan's situation-- which was a cliffhanger in the last book The Sound of Broken Glass-- is not cleared up by the end of this book. Yes, To Dwell in Darkness ends in yet another-- rather chilling-- cliffhanger, but unlike some readers who prefer that everything be resolved at the end of each book, I do not mind a dangling plot line. I tend to like story arcs that develop over the course of a few books, and I trust Crombie to deliver the goods. (It also doesn't hurt that I was present at an author signing in which Crombie said that she's going to deal with Duncan's situation in the next book.)

While Duncan is dealing with the explosion at St. Pancras, Gemma has her own case to solve, but even though her investigation does provide Duncan with the inspiration to solve his own, there's so little of it that Gemma almost feels like filler, and that didn't set well with me at all. However, her case does prove that it's often the attention to even the smallest of details that can go on to solve murders.

Yes, I've been grumbling just a bit, but there is a lot to like in this book. I enjoyed seeing Duncan out of his comfort zone. He's used to being liked at work, and he's not in his new position. His second-in-command, Detective Inspector Jasmine Sidana, seems to have little use for him at all, and Duncan has to learn how to deal with that. Cat lovers in particular will rejoice when Duncan and Gemma's two sons rescue a mother cat and her kittens and insist on bringing them home. Speaking of those two sons, as the series progresses, I am more and more impressed with the oldest. Kit is growing up and proving that he can think on his feet and take appropriate action when something doesn't feel right.

Crombie is known for weaving a bit of history into her books, and in her latest she shares her knowledge of London train stations. She had me so fascinated that I was looking up the London station from which our train will be leaving for Inverness next year.

I always look forward to Deborah Crombie's next book, and I'm all for any author trying something different, but I have to be honest and admit that I'm hoping that she's got the thriller out of her system and will return to the richness of her earlier books. To Dwell in Darkness is a good book. It's just not her best.