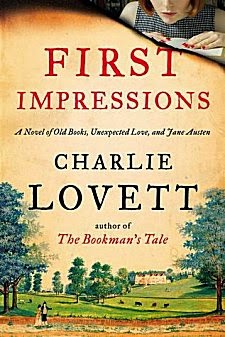 First Line: Fond as she was of solitary walks, Jane had been wandering rather longer than she had intended, her mind occupied not so much with the story she had lately been reading as with one she hoped soon to be writing.

24-year-old Sophie Collingwood has a degree from Oxford and a deep and abiding love of books. After her beloved uncle's death, Sophie inherits his London flat and takes a job at an antiquarian bookshop where two different customers request a copy of the same obscure book. In searching for the book, Sophie is drawn into a mystery that will not only cast doubt on the true authorship of Pride and Prejudice but will also threaten her life.

I love Jane Austen's novels although I wouldn't call myself a diehard fan, and I do occasionally read one of the books that have proliferated like mushrooms since the BBC and Colin Firth propelled her back into the limelight in 1995. After finishing Charlie Lovett's book, I loved it. I loved Sophie's relationship with her Uncle Bertram and their mutual passion for books. I loved learning about rare books and printers and old documents long forgotten in library archives. I got caught up in Sophie's quest to find out if Jane Austen was a plagiarist. It was only after those first impressions faded that I really began to mull over what I'd read, and that's when my opinion began to change slightly.

Lovett's tale is told in alternating chapters, Sophie's in the present day and Jane's between the years 1796 and 1817. Due to the 200-year differences in the spoken language there is never any difficulty in knowing if you're reading about Sophie or Jane. First Impressions is alive while Sophie's uncle lives. Every bit of Lovett's passion for books glows on the page, and I read that section with a big smile on my face.

Jane's chapters are strong throughout. The author uses quite a bit from the historical record that anyone even vaguely familiar with Austen will recognize. I enjoyed the friendship between Austen and the elderly clergyman Richard Mansfield-- a kindred spirit who (for the purposes of this book) was Jane's sounding board when she was uncertain about her writing.

Although in my mind the outcome was never in doubt, I also enjoyed reading Sophie's quest to prove that Jane Austen was not a plagiarist. The problem I found that I did have was with Sophie herself. After Uncle Bertram's death (which happens very early in the book), Sophie soon has two handsome men after her, and her chapters begin to dip too far into chick lit for my taste. It was obvious to me which man she should fall for, so the similarities with Stephanie Plum's inability to choose between Moretti and Ranger were unwelcome. There was also the matter of Sophie's ethics. She has a sense of entitlement that does her no credit, and the first time she steals something, I was flabbergasted.

Fortunately Sophie isn't the only character in the book. Her sister Victoria, her Uncle Bertram, Jane and Richard Mansfield-- thankfully they all outweighed my opinion of Sophie, and they along with an intriguing story line are the reasons why I still found a great deal of enjoyment in reading this book. One questionable apple doesn't always spoil the barrel.