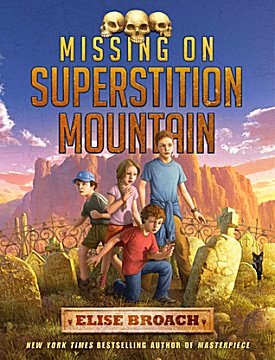 First Line: The day Josie ran away was the beginning of everything-- the bones in the canyon, the haunted mountain, the buried treasure, the town full of secrets-- but the Barker boys didn't know it then.

Having just moved to Arizona from Illinois, the three Barker brothers haven't had a chance to get to know anyone in their small town of Superstition. It's summer, and they're tired of hanging around the old house their parents inherited from "crazy Uncle Hank." Their dad is busy at his masonry business, and their mom is a medical illustrator with a deadline who works at home. When Josie the cat runs away, it gives Simon (11), Henry (10), and Jack (6) something to do-- even if the cat seems to have headed straight for Superstition Mountain, a place their parents have repeatedly warned them to stay away from.

As the boys search for Josie, they can't help feeling that there's something creepy about the mountain. When they find three skulls sitting on a ledge above a canyon, that feeling changes to certainty. They know there's a mystery that needs to be solved, and with the help of their new neighbor Delilah, they're determined to solve it.

Elise Broach does an excellent job of weaving together various legends about the Superstition Mountains just outside of Phoenix, Arizona-- including the one about the Lost Dutchman Mine. Children will be reading an exciting tale of adventure, but they'll also be absorbing the deeper subjects of history, friendship, and exploration.

When this book was offered to me, I wasn't told that it was a children's book, but since it is a mystery, and it is set right in my own backyard, it didn't make much difference. What impressed me was how much I enjoyed reading it, and how much it reminded me of similar books I read when I was a child. Simon, Henry, and Jack are following in the footsteps of the Hardy Boys, and it was wonderful to read about four children who were off on their bikes exploring and not cooped up inside enslaved to electronics. In fact, they're only on the computer once for a brief time in the entire book.

Since this is the first book in a trilogy, it will be interesting to see how the characters and the story develop. Simon is the responsible older brother with just a touch of the know-it-all. Jack is the extremely annoying little brother his siblings wish they could leave behind, and Henry as the middle brother feels a bit like a misfit. The story is mostly told from his point of view, so we get to know him best. Delilah? She's the first friend the boys have made in Superstition, and even though she's a girl, she's a big help and can't be left behind. The parents are there behind the scenes. They're busy keeping the bills paid so the boys can have adventures.

It's obvious that this is the first book in a trilogy because little plot threads are left dangling. I'm convinced Josie the cat knows a lot more than she's admitting, and what about the behavior of the local librarian? Is she hiding something? And there was definitely something odd about those tombstones in the cemetery!

If it sounds as though I was hooked after reading Missing on Superstition Mountain, I was. I'm looking forward to seeing what those four get up to next.