The Kill Switch by James Rollins and Grant Blackwood 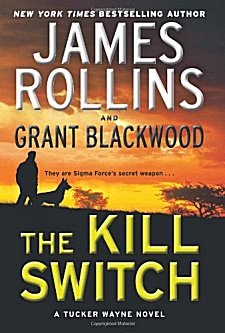 First Line: Doctor Paulos de Klerk packed the last of the medical supplies into the wooden trunk and locked the three brass clasps, mumbling under his breath with each snap.

Sigma Force is given a vital mission that must be carried out immediately, and Tucker Wayne and his partner, the retired war dog Kane, are the only ones close enough to get in quickly and get it done. Escorting the pharmaceutical magnate out of Russia and into the United States isn't easy from the first second Tucker and Kane set foot in Siberia. Someone knew he was coming, and now Tucker has to try to outfox the group that wants to keep Abram Bukolov in Russia. Bukolov holds the secret to a deadly bioweapon that's going to take them on to South Africa and Namibia before the billionaire ever has a chance to see America.

James Rollins knows how to take interesting tidbits from history and science and turn them into an adrenaline-fueled thriller. In the case of The Kill Switch, the history is the Boer War and the science involves something that could very well be the stem cells of the plant world. Add to the history and science the intriguing duo of Tucker Wayne and Kane, and the enjoyment factor increases tenfold.

Having already read a bit about this man and his dog, I was looking forward to a little background on the two of them, and I was not disappointed. Tucker's childhood and his service in the military have led him to make rules for himself that can cause problems. One of those rules is that he won't kill a dog. Dogs have given him the love, the friendship, and the loyalty that humans never have, and although his "rule" makes sense to him, it is something that does put him and the others at risk. Kane, the Belgian shepherd, is just as devoted to Tucker as Tucker is to him. He is intelligent, extremely well-trained, and I can see some readers turning the pages of The Kill Switch and thinking that Kane is Super Dog, a fantasy of Rollins' imagination. Truth is, anyone who knows what these war dogs are capable of doing says that Rollins downplays their abilities.

I enjoyed this book for increasing my knowledge about Tucker and Kane, and I found the tie-in to the Boer War and the science fascinating. The action is almost non-stop, but if there is a weakness in this book it is the fact that too much of that action is predictable. However, I look forward to seeing what's in store for these two.