Death of an Old Git by Andrea Frazer 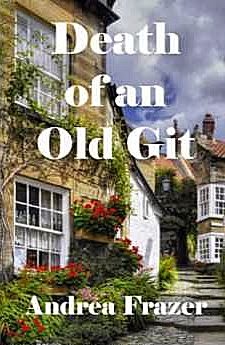 First Line: The village of Castle Farthing drowsed in the heat of the July sunshine, postcard-pretty with its diamond-shaped green, duck pond, and Saxon church.

Old Reg Morley is the man everyone loves to hate there in the village of Castle Farthing. He's a petty thief, a peeping Tom, a troublemaker who insists that children should be neither seen nor heard, and he seems to have trained his dog to defecate on demand in his neighbors' gardens. When he's found strangled to death in his kitchen, the entire village breathes a sigh of relief.

When Detective Inspector Harry Falconer and his partner, Acting Detective Sergeant Davey Carmichael, drive from Market Darley to begin their investigation, they discover most of Castle Farthing's residents hovering as near to old Morley's place as they can get-- and that the local constable has let the vicar into the crime scene. They've barely gotten their bearings when Falconer realizes that practically everyone in the village had a reason to want the old man dead. Uncovering all the village secrets-- and the killer-- is going to be a long, hard slog, but Falconer will not rest until the case is solved.

I was first attracted to this book by its title, which is proof that, not only am I an Anglophile, I have an English husband as well. But trouble quickly loomed on the horizon. The writing was stiff, and there was far more telling me what was going on rather than leaving the characters alone to show me. Just as I was thinking of stopping and choosing a different book to read (at the end of chapter two), something shifted and all the separate parts of this little mystery clicked into place. From a book I'd decided not to finish, Death of an Old Git turned into a very fun, enjoyable read.

The reason for this abrupt about-face is the author's marvelous sense of humor. I lost count of the times Andrea Frazer either made me smile or made me laugh out loud. Falconer is one of those fussy men; everything-- from his clothing and appearance to his home, car, and office-- must be just so before he's happy. Imagine this meticulous man partnered with "the human ironing board" Acting Detective Sergeant Davey Carmichael-- a towering young man who has all the fashion sense of a manic, colorblind stork. To Falconer's astounded and agonized eyes, Carmichael's choice of clothing alone sets the tone for each day of the investigation. And the humor certainly isn't limited to clothing.

The plot of Death of an Old Git isn't complicated. Falconer and Carmichael go 'round and 'round Castle Farthing reinterviewing all the suspects until they finally piece things together. The identity of the killer should be rather clear, and Frazer even has an interactive element in the story when Falconer finds something at the crime scene, slips it into his pocket, and promptly forgets it. Each time it was mentioned, I wanted to grab Falconer by his freshly starched and ironed collar and shake him just a little bit. See? Interactive!

So... a shaky start and a simple plot usually elicits a thumb down from me, but not this time. I was quite frankly hooked and bedazzled by Frazer's wit, humor, and her two main characters. I already have the next book in the series lined up and ready to read.