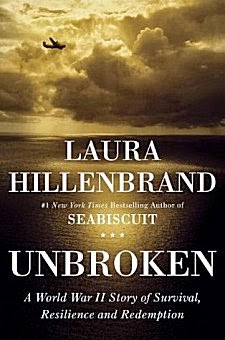 First Line: All he could see, in every direction, was water.

I loved Laura Hillenbrand's bestseller Seabiscuit so much that I knew I would definitely read her next book. Fortunately the subject matter of Unbroken is something that draws my interest like a magnet. Many men in my small farming village in central Illinois enlisted and fought during World War II. My grandfather was one of them. While he was serving aboard an LST in the South Pacific, another man in town was a prisoner of war in a Japanese labor camp. As she did with Seabiscuit, Hillenbrand illuminates the life of Louis Zamperini, a man who grew from being an incorrigible troublemaker as a child to an Olympic caliber track and field star to a man who seemed to be able to survive anything that the war could throw at him.

As she did in her previous book, Hillenbrand draws readers in by her careful layering of facts. Starting with a framework of a specific decade for example, she builds her house, brick by brick, with historical data of how much things cost, what sorts of jobs were available to families like the Zamperinis, how other relatively unknown people were doing, all the way up to the roof with what the famous were accomplishing at the same time. By the time Hillenbrand has completed the house, the reader can open the door, walk in, and immediately feel at home because everything has been so meticulously crafted that we know how each piece fits into the whole. Hillenbrand has the gift of making readers feel like participants and not just observers.

Zamperini's life is absolutely fascinating. The way he behaved as a child makes it clear that this man was a survivor. He didn't like the word "no", and if someone told him he couldn't do something, he immediately set out to prove that person wrong. It's this attitude that turned him into an Olympic runner who competed in the 1936 Berlin Olympics, and it's this attitude that helped him survive the crash of his bomber, being adrift on a life raft for weeks, and-- the ultimate test of all-- a Japanese POW camp.

The sections about his childhood and his competitive running are strong, as is the part about his early days in the Army Air Corps. Once his plane goes down, the story becomes riveting, and it's altogether too easy to forget that what you're reading is true. When Zamperini finally returns home, his nightmare is  anything but finished, and some of what he experienced during this period is eerily similar to what my own grandfather went through.

More credit to Zamperini that he was eventually able to vanquish his demons, to be happy and to make those around him happy as well. He should be an inspiration to us all-- and Hillenbrand deserves thanks for sharing this man's life with the world.