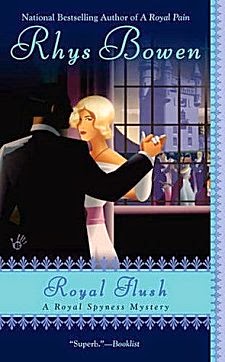 First Line: It is my opinion that there is no place on earth more uncomfortable than London during a heat wave.

Ever in search of ways to earn an honest living, impoverished Lady Georgiana Rannoch (great-granddaughter of Queen Victoria and thirty-fourth in line to the throne) neglected to check the wording of an advertisement she placed in the newspaper. As a result, she's been hustled off home to Scotland just in case scandal should rear its ugly head. As luck would have it, Castle Rannoch is just a hop, skip, and a jump from Balmoral where the Prince of Wales is in residence, and the Home Office instructs Lady Georgie to keep her eyes peeled for threats to the Crown. You see... it appears that a series of serious accidents is targeting the royal family. Hopefully Lady Georgie isn't high enough on the list to warrant her own brush with death....

Once again Rhys Bowen has crafted another sparkling outing for Lady Georgie, a young woman with a good heart, a marvelous dry wit, and the misfortune to be related to royalty. Although these books are intended to be lighthearted and  fun, Bowen skillfully provides a glimpse into the upper class British world of the 1930s while George V was on the throne.

Since She-Who-Must-Not-Be-Named (AKA Wallis Simpson) is a member of the shooting party the Prince of Wales has gathered at Balmoral, what could be better than to schlep her and her group of loud Americans off on Lady Georgie's mild-mannered brother and her hateful sister-in-law at Castle Rannoch? It's a plot element that works a treat because we get to see Georgie's sister-in-law in an entirely different light, as well as getting to see Georgie's (very non-royal) grandfather again.

I was fairly certain of who was causing mayhem early on in the book, but I couldn't care less because the emphasis in these books is to have fun, and I've learned that I can always count on Lady Georgie to make me laugh while I get to be a voyeur in the world of the rich and the royal.