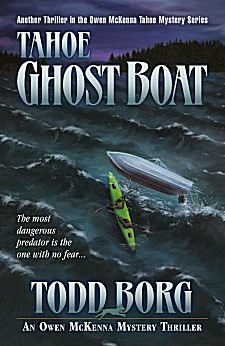 First Line: The wind and waves of the winter storm were ferocious.

It's been brought to Gertie O'Leary's attention-- on several occasions-- that she's just not like other teenage females, but this bright young girl who wants to be a movie director is determined to make that work for her. Unfortunately some unscrupulous and highly dangerous people have made Gertie the centerpiece of an extortion plot, and she's been kidnapped.

Her mother calls private detective Owen McKenna for help, and when he learns that Gertie's parents are more concerned about losing the $2 million ransom than they are about their daughter, he knows that he's going to be the one to put Gertie's welfare above all else. But how will he be able to beat the odds against a group of killers whose orders are to kill the girl?

Technically I'd have to say that Todd Borg's Owen McKenna novels are thrillers. Not only are they thrillers, they're the best sort of Formula 1 thrillers with pedal-to-the-medal chase scenes on hairpin curves, a series of switchback plot twists, and a driver who will risk it all to cross the finish line first. Tahoe Ghost Boat is the type of book you stay up late into the night to finish, and it's not just because it's a high-class thriller; it's because Todd Borg also knows how to create characters with depth and substance. The type of characters that get under your skin, make you care about them, and stay in your memory long after you've finished reading the book.

Owen is a former cop who never became too cynical to care. Owen's entomologist girlfriend is smart, funny, level-headed, and just the sort of person you want to come home to after a long day of being chased by psychotic killers. She's so good she even makes bugs sexy. Owen's friends on the local police force provide more support and levity, but if you're looking for the best partner you could ever hope to have, look no further than His Largeness-- Spot, a harlequin Great Dane. Owen without Spot would be like... Butch without Sundance... unthinkable. Spot isn't Super Dog either. He's just a huge, lovable, well-trained canine.

Borg doesn't stop with the fantastic cast of regulars either. Young Gertie is another winner in a long line of this author's characters. She's been given the short end of the stick, but she refuses to give in, and you just love her for it. Even a reclusive and slightly batty woman gets sympathetic yet honest treatment from her creator.

An underwater scene in Lake Tahoe did strain the limits of my credulity, but in no way did it come close to ruining my enjoyment of the book. By now Owen feels like an old friend, so I'll allow him to be Superman this time-- as long as he doesn't start making a habit of it.

These books are for readers who love action and plot twists as well as characters with depth and intelligence and humor and compassion. When you finish reading an Owen McKenna book, you're left with two feelings: that despite everything the world actually is a pretty good place, and... how long until the next one?