The Moor by Laurie R. King 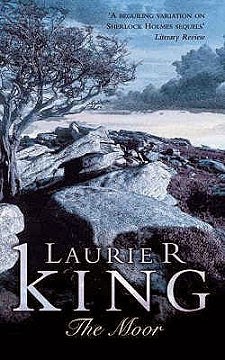 First Line: To say I was irritated would be an understatement.

Less than a month has passed since Mary Russell and her husband, Sherlock Holmes, concluded a very dangerous investigation. Mary has scarcely had time to bury herself in her studies at Oxford, so when the telegram from Holmes arrives demanding her presence in Devonshire, she complies with ill grace. Little does she realize that she and her husband will be revisiting his most famous case-- The Hound of the Baskervilles-- deep in the otherworldly expanse of Dartmoor. Through the mists on the moor there have been sightings of a spectral coach made of bones that is accompanied by an immense hound with a single red glowing eye. Russell and Holmes will have to winnow the truth from all the ghost stories in order to solve this case.

King leaves few stops unpulled in this atmospheric tale. For those of us who love settings that qualify as characters, Dartmoor permeates every page of this fourth book in her marvelous series. The land, the weather, the abandoned mines, the remote farms, the legends and tales... King brings it all to life-- sometimes to creepy, hair-raising life.

Although Sir Arthur Conan Doyle's The Hound of the Baskervilles is the quasi-foundation of this book, it's not necessary to have read it before picking up The Moor. If you have read it, you'll begin King's book with a shiver of anticipation for the spooky things that certainly lie ahead. And they do. I found the author's depiction of Dartmoor enough to give me goosebumps without the sightings of bony coaches and one-eyed hounds or the strange new inhabitants of Baskerville Hall.

As usual, King knows how to make us feel as though we've stepped right into England in 1924, and she certainly knows how to tell a story, but it's her characters who make the books truly memorable. Holmes is Holmes. You'd recognize him anywhere, and he's perfectly at home in the early twentieth century. Mary Russell is brilliant in her own way and incredibly strong-willed. If these two were horses, few people would ever dream of harnessing them together. Only the very wise would be able to see that it's the only pairing either of them would accept. One of the treats of reading this series is to watch these two individuals-- who spend a lot of their time apart-- gradually learn that they can become a couple without sacrificing the parts of themselves that they hold most dear.

Even though I found that I could deduce most of the mystery this time around (I'm still not sure why), The Moor was a delight to read. Atmosphere, setting, time period, Sherlock Holmes, and one woman strong enough to stand side by side with the world's greatest detective. Get comfortable and immerse yourself in this tale.