The Ghost Walker by Margaret Coel 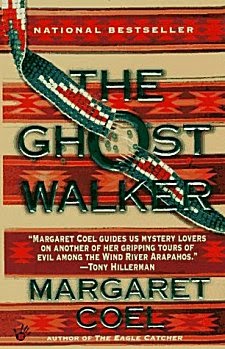 First Line: Snow had fallen all day, and now the open spaces of Wind River Reservation lay under deep powder.

In this second book in Margaret Coel's Wind River mystery series, it's winter in Wyoming and cold enough to freeze you all the way down to your bones. When Father John O'Malley's old truck breaks down on a lonely road during a snowstorm, he has to walk for help. He finds a body dumped in a ditch and shortly thereafter is given a lift by a nervous, evasive stranger. When the police arrive, the body has disappeared, and the Arapaho begin talking about ghost walkers-- spirits that cause trouble until their bodies are given a proper burial.

And trouble begins almost immediately. O'Malley is told that his superiors have decided to sell his small reservation church to some sort of investment group. O'Malley has parishioners who need help now, and as he does his best to provide what is needed, he's sick at heart wondering what will happen to these people if the church is indeed sold. Then a troubled young Arapaho disappears, his former girlfriend is murdered, and he learns that friend and lawyer Vicky Holden's daughter is back in the area. Father John and Vicky need to find out what's going on fast before any more people die.

Margaret Coel's writing puts you right on the Wind River Reservation in Wyoming-- and that winter wind cuts right through you while you try to piece together all the clues in a very satisfying mystery. While the setting is beautifully rendered, what holds all the pieces of location and investigation together is her superb cast of characters.

Father John O'Malley is a real, flawed human being who cares deeply for the Arapaho on the Wind River Reservation. He has taken the time and trouble to learn their history and their customs, and as a result his parishioners have learned to trust and value him as an important part of their lives. His friend Vicky Holden is a bit prickly and tends to be very reserved, but she's had a tough row to hoe-- escaping from an abusive alcoholic husband and working hard to earn a law degree. Now she's back on the reservation to help her people, but she straddles both worlds and conflicts can arise-- like the sudden reappearance of her daughter, who resents Vicky for leaving her father and making her own way in the world.

All the characters play against each other very well as the various threads of the plot begin to mesh together. Thankfully Coel adds welcome touches of humor to all the serious goings on of the plot, letting us watch the quick-thinking priest wheel and deal to get the people on the reservation the things they so desperately need. Especially humorous is the scene in which O'Malley cuts a deal with a car salesman.

Equally important amongst the murders, the setting, and the characters are the glimpses Coel gives us into Arapaho culture:

Father John gave a nod of understanding. There was no concept of aunt, uncle, or cousin on the reservation. Your brother's child was your child. Thomas and Mardell had no children of their own, but they were not childless.


It's a concept other cultures would do well to take to heart.

This is only the second book I've read in this series, but the further I get into it, the deeper I fall. Margaret Coel knows how to write a feast for both mind and heart.