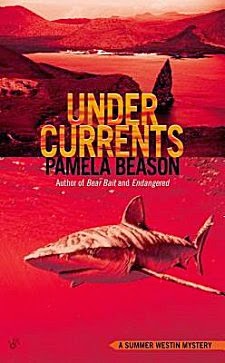 First Line: Sam Westin stared out her back window at the endless cold rain drizzling through the shaggy limbs of the Douglas firs.

When wildlife biologist and freelance reporter Sam Westin is hired to cover a marine survey expedition in the Galápagos Islands, she jumps at the chance-- only having momentary qualms about fudging her diving experience. The company she's working for wants her to post articles as two different people, which Sam does think is strange, but she wants to see those giant tortoises and marine iguanas, so if the bosses want posts with two bylines, that's what they're going to get.

Dr. Daniel Kazaki, the marine biologist and Sam's diving partner is a nice guy who knows his stuff, but when the locals learn that he's working for the Natural Planet Foundation these two suddenly can't find a boat or guide to take them out on their dives, and they're kicked out of their hotel. The Galápagos are supposed to be a pristine paradise for wildlife, but Sam rapidly learns that governmental controls are very loosely enforced and poachers are killing sea cucumbers and sharks for the lucrative Asian market. With someone already trying to sabotage their expedition, Sam is slowly realizing that human predators are much more deadly than any shark.

In the space of three books, the Sam Westin environmental mysteries have become some of my favorites. If you enjoy Nevada Barr's Anna Pigeon novels, you're definitely going to want to read Beason's series. Sam Weston is smart, tough, committed to spreading awareness of issues involving wildlife, and is much more likely to pick up her camera than she is to even think about touching a gun.

In Undercurrents, it's Sam's show, but Beason's secondary characters provide solid backup. Some of the characters are capitalists wanting to profit from appearing to be pro-environment while others are local and show both sides of the poaching issue the Galápagos face. One of the strengths of Beason's characterizations is that-- although you may grow fond of some of these characters-- they can surprise you by being achingly human.

Beason's characters then proceed to populate a wondrous underwater world, and the scenes are so vivid that you'll probably find yourself wanting to join Sam on her dives. This underwater Garden of Eden isn't really paradise, however, and the author doesn't candycoat what humans are doing to it.

Okay, I've talked about the characters, the setting, and the environmental issues the author raises... what about the mystery? It's a good one. I was convinced I knew the identity of the killer-- but I never saw it coming. Hopefully what I will see in the near future is another Sam Westin mystery. I'm becoming addicted.