The Cuckoo's Calling by Robert Galbraith 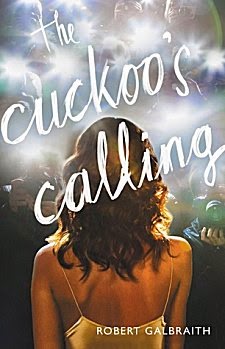 First Line: The buzz in the street was like the humming of flies.

Cormoran Strike needs some sort of miracle to keep his business going. His longtime girlfriend has thrown him out, and now the private detective is reduced to one client, a mound of bills, and living in his tiny office in London. Little does he know it, but the second Robin Ellacott walks in and assumes the role of temporary secretary, Strike's fortunes have taken a turn for the better.

They seem to rise even further when John Bristow walks in and hires him to investigate the death of his sister, the legendary supermodel Lula Landry. Landry's death was ruled a suicide, but John insists it wasn't. In short order, Cormoran Strike and his secretary are thrown into a world they could only dream of and read about in the tabloids. And somewhere amongst all the rich and shameless boyfriends, models, and designers lies the truth.

Let's face it, I probably never would have picked up this book to read if I hadn't discovered that Robert Galbraith is a pseudonym for J.K. Rowling. I find books I want to read almost every single day, and I have to draw the line somewhere. But I simply could not draw that line in front of the creator of Harry Potter. I had to know what sort of crime fiction writer she is. What's my verdict? It's a bit mixed.

I thought the mystery was strong and ultimately very satisfying. It certainly wasn't one of those that I figure out within the first few chapters and skip to the end to see if I'm right. There were just enough people with excellent motives on the suspect list to keep me guessing without having to resort to using a scorecard.

However, as strong as the mystery is, it's not what sucked me right into the pages of this book. No, that is all due to the two main characters, Cormoran Strike and Robin Ellacott. Strike is a veteran who lost his leg to a land mine in Afghanistan. He seems at loose ends-- as if he hasn't really made a decision to buckle down and make a go of this private investigating gig. He needs a catalyst, someone strong and reliable, and that would be Robin Ellacott.

Recently arrived from Yorkshire, Robin has a new fiance and all sorts of plans for what she wants her married life to be like. What's amazing and heartwarming is to watch how quickly she takes the initiative to get the office organized and to assume responsibility for some basic research into the case. She's a natural who rapidly craves learning more and more about the business-- something that does not fit in with all those wedding plans.

The one thing that almost had me talking to myself was the pacing of this book. It was glacially slow. I don't mind stories that unfold gradually, so when I keep stopping to hold the book out in front of me, stare at it, and ask, "When is something going to happen???" you know there's a problem.

But as many times as I asked the silent book when something was going to happen, it never ever occurred to me to stop reading. Why? For the simple fact that the story and Cormoran and Robin did suck me in; I had to find out what happened to them, and I had to find out what happened to Lula Landry. Will I be reading the second book in the series, The Silkworm? You bet! I just hope that I won't be conducting a one-sided conversation as I read.