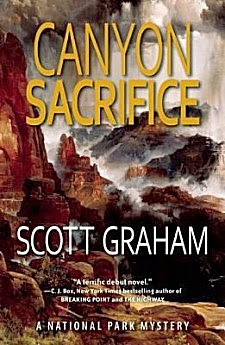 First Line: A group of middle-aged Japanese tourists gathered in a tight knot twenty feet from the edge of the Grand Canyon, focused on something Chuck Bender could not see.

Recently married to a woman with two young daughters, archaeologist Chuck Bender decides to take his new family camping at the South Rim of the Grand Canyon. Disaster strikes when the youngest girl is kidnapped. The kidnapper's demands seem to focus on Chuck himself, and even though he's nowhere near suited to the task, as a new husband and father, he's determined to step up to the plate and do whatever it takes for the safe return of his daughter.

Canyon Sacrifice is going to make you see the Grand Canyon in a whole new way. Chuck Bender is the perfect guide, as he weaves strands of geology, park history, Native American culture, and archaeology into a good old action-packed page turner.

I loved how Graham put together all the canyon lore in a non-academic, non-preachy manner that tells readers just as much about the characters as it does the Grand Canyon itself. Chuck Bender is a fascinating main character. He's a loner who's been running his own archaeology business for years, so getting used to being part of a family is going to be a huge adjustment for him to begin with-- but to start things off with a kidnapping? As Bender races to save his daughter, he learns quite a bit about himself and what he thinks is most important in life.

Probably my favorite section in the book is Chuck's hike down into the canyon. It's a race against time that could very well kill him. The entire episode tells us a great deal about Bender the man, as well as the respect with which the Grand Canyon should be treated.

Graham also shows skill in plotting a mystery, and now that he has his main character well established, I'm really looking forward to the next books in this series. His secondary characters need to have a chance to shine, too.

If you're a reader who loves Nevada Barr or C.J. Box, chances are excellent that you'll enjoy this first National Park mystery. Give it a try.