A Crown of Lights by Phil Rickman 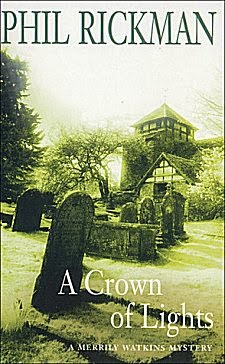 First Line: Betty was determined to keep the lid on the cauldron for as long as possible, which might just-- the way she'd been feeling lately-- mean for ever.

When a pagan couple buys property on the Welsh border that has a redundant church attached, a match is touched to the powder keg of religion in the area. Robin and Betty Thorogood are nice, unassuming, and blend right in-- until the area's Church of England exorcist Merrily Watkins is coerced into taking part in a Jerry Springer-like television program. When the information comes out during the program, it sets off a local fundamentalist preacher, and the villagers turn against the young pagan couple. (Yes, a bit like villagers armed with pitchforks heading toward Castle Frankenstein.)

But there's more going on than just various religious factions pitting themselves against each other. There's the country lawyer who refuses to be parted from his dead wife; and the mystery of five local ancient churches all dedicated to St. Michael the slayer of dragons. Whether she likes it or not, Merrily Watkins is right in the middle of it all, and since there is a killer on the loose trying to guard an old tradition, she'd best tread carefully.

Although this book moved a bit slower than I would like from time to time, it's still an excellent blend of characterization, plot, and atmosphere. I would imagine many people who pick up one of Rickman's Merrily Watkins novels might put it right back on the shelf when they read words like "supernatural," "exorcist," or "horror." To each his own, but I would love to suggest to these folks that they might want to give his books a try.

The connotations that swirl around the words that I mentioned have more to do with the passage of centuries and the shifting focus of human belief systems. Rickman's books have everything to do with buried secrets that have been allowed to fester and taint those who would hide this information than they have to do with specters and things that go bump in the night. His plots are built solidly upon the rock of human frailty, and the hints of the supernatural serve as wisps of fog touching the corners of your vision and making the hairs on the back of your neck rise. The friction between Christianity and paganism was extremely well done here, and I had no clue what was really going on until the reveal.

A good solid story with the tantalizing taste of the otherworldly only works when guided by a strong cast of characters. Merrily Watkins is priest, exorcist, mother-- a smart, brave, and compassionate woman committed to doing what's right and good for people-- oftentimes against the advice of church hierarchy. (Merrily believes in helping people regardless of their church affiliation-- or lack thereof.)  She calls her teenage daughter "flower" and although Jane is the usual prickly moodswinging adolescent with more than a passing interest in the occult, she's basically a good kid who loves her mother. In fact Jane and her boyfriend of the moment Eirion (Jane always thinks of him as "Irene") not only supply some of the thrills and chills in A Crown of Lights, they add some of the humor that's needed to leaven a rather dark tale.

My interest in the supernatural is superficial at best, and if that's all Phil Rickman's books had to offer, I wouldn't read them. Everything he writes is rooted firmly in humanity-- our mistakes that frighten and shame us, and the lengths to which we will go to hide and protect those mistakes-- and in the history and immeasurable passage of time in this area of the Welsh borders. Several times in reading A Crown of Lights, I was reminded of an evening when my husband and I were driving through the English countryside and the tower of an ancient church loomed suddenly above me out of the dark and the fog. Phil Rickman is a master of character, of blending history and belief, and of atmosphere. Whenever I read a Merrily Watkins book and feel "a tighter breathing, And zero at the bone," I smile.