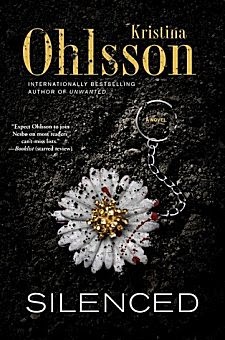 First Line: The meadow with its grassy greenness and wildflowers had always been hers.

Fredrika Bergman is experiencing pregnancy at its worst. What she doesn't need is to be assigned to a tough and complex murder investigation, but of course that's exactly what happens.

A popular but controversial priest and his wife have been found dead in their apartment, an apparent murder-suicide. As a civilian appointee, Bergman is the only person on the team who has no police background, but the detectives working with her are going to need every bit of her persistence and insight. As the investigation begins, none of the people they talk to can really believe that the priest could murder his beloved wife; the evidence just isn't stacking up. Unbeknownst to them, their searching will eventually lead them to two unreported crimes: the rape of a teenage girl fifteen years ago, and the present-day hit-and-run death of an unidentified man. When they're done, they will have uncovered a shocking cover-up in which the consequences of past tragedies continue to affect the present.

Kristina Ohlsson has written such a skillfully complex story filled with nuanced characters that I wish I had read the first book in this series, Unwanted. Silenced is definitely an ensemble book in which the supposed lead, Fredrika Bergman, really doesn't play a substantially larger part than her cast mates.

The lives of the police officers play an important role and give the book even more believability and depth. Fredrika is in her thirties and has decided to have a child by a much older married man. One of the most touchingly honest scenes in this book involves a mandatory dinner at Fredrika's parents so they can meet the father of her child. Each police officer's private life (to varying degrees) is woven into the story to show how personal matters can affect their job performance. One officer in particular, Peder Rydh, has gone through a messy separation from his wife and children, and his life has begun to implode. He's become a boor, a jerk, and in many other books, that's how he would have remained-- a figure of derision. But in Ohlsson's hands, we are given the chance to understand him and to hope that he can pull back from the brink. It may sound as though all this character examination would bog down the plot, but it is enhancement, not hindrance.

Speaking of plot, Ohlsson's is first-rate, with several elements that I'm not going to mention so you can get the full effect if you decide to read the book. As I've said before, the plot is complex, with things not being how they first appeared. Layer upon layer of deception is gradually revealed, all the way to the book's conclusion. Silenced may not be quite as tough or as graphic as some of the other Scandinavian crime fiction we've been introduced to, but I like Ohlsson's approach to her subject matter. Her characters show us all the differing sides, and her conclusions pack a wallop. This is a series that I definitely want to continue reading.